Why We Should Teach Kids to Call the Robot ‘It’

As a new generation grows up surrounded by artificial intelligence, researchers find education as early as preschool can help avoid confusion about robots’ role

If you want your preschooler to grow up with a healthy attitude toward artificial intelligence, here’s a tip: Don’t call that cute talking robot “he” or “she.”

Call the robot “it.”

Today’s small children, aka Generation Alpha, are the first to grow up with robots as peers. Those winsome talking devices spawned by a booming education-tech industry can speed children’s learning, but they also can be confusing to them, research shows. Many children think robots are smarter than humans or imbue them with magical powers.

The long-term consequences of growing up surrounded by AI-driven devices won’t be clear for a while. But an expanding body of research is lending new impetus to efforts to expand technology education beyond learning to code, to understanding how AI works. Children need help drawing boundaries between themselves and the technology, and gaining confidence in their own ability to control and master it, researchers say.

AI is already causing plenty of jitters among adults, says Craig Le Clair, a principal analyst with Forrester and author of a new book on workforce automation. Many workers are worried about programming AI-driven equipment on the job, or fear AI will eliminate their positions altogether. “Machinists are having nervous breakdowns,” he says. “We need to teach children the attitude that, ‘I can collaborate and work with machines. I’m not threatened by them,’ ” he says. “And that education has to begin in preschool.”

NAO, an educational robot by SoftBank Robotics, is designed for children as young as preschool age. PHOTO:FRANCOIS GUILLOT/AGENCE FRANCE-PRESSE/GETTY IMAGES

Preschoolers can understand more about AI than you think. Researchers at Massachusetts Institute of Technology are finding some surprising successes teaching AI to children as young as age 4, helping them program robots to learn from patterns or features in data. Parents, too, can help instill a healthy self-confidence in youngsters by tweaking their own language and behavior, encouraging children to take apart AI-driven gadgets, and talking with them about where the devices get their intelligence.

Small children need help understanding the workings of a robot. “They know robots aren’t alive and don’t eat, sleep, breathe or reproduce, but at the same time they attribute to them the ability to think and have emotions and sensory abilities,” says Jennifer Jipson, a professor of psychology and child development at California Polytechnic State University in San Luis Obispo.

Children learn readily from likable robots that follow their gaze and respond to what they’re saying, studies show. Interacting with a robot that appears to show curiosity can spark a child’s inquisitiveness and eagerness to learn.

Youngsters also pick up conversational cues from robots. One child in a 2017 University of Washington study started mimicking the repetitive speech of a robotic dinosaur when asked by her father at home to do something she didn’t want to do, saying “I didn’t get that,” according to the research.

Children tend to overestimate the capacity of a robot, with about a fourth of 4-to-10-year-olds in a 2018 study saying Cozmo, a small toy robotic vehicle with an expressive face, was better at solving a maze than they were.

A talking doll was able to persuade some children to change their answers to questions about how to treat peers, saying it’s OK to tease another child, according to a 2018 study led by MIT researcher Randi Williams with Cynthia Breazeal, founder and director of the personal robots group at MIT’s Media Lab. It wasn’t clear whether the children actually believed it was OK or were just testing the doll.

Children can become emotionally attached to robots. Most children ages 9 through 15 who interacted with a humanoid robot for 15 minutes said later they might go to it for comfort if they were feeling sad or lonely, and believed the robot could be their friend, according to a 2012 study in Developmental Psychology.

All that is fertile ground for teaching. Researchers at MIT have developed an AI curriculum called PopBots that guides children as young as 4 to teach a robot to play the game Rock, Paper, Scissors; to divide foods into healthy and unhealthy groups; and to remix melodies to create new strains of music. The children answered many questions correctly on a test afterward and were able to discuss AI concepts, Dr. Breazeal says.

“Before we started this work, we were told point-blank, ‘You can’t start teaching kids AI until high school,’ ” Dr. Breazeal says. She was surprised that the preschoolers were able to grasp the concepts as well as they did.

“When we asked them who’s smarter, the children could say, ‘The robot can beat me in Rock Paper Scissors—but I programmed it to do that, so I’m actually smarter,’ ” says Dr. Breazeal, who is heading development of an AI curriculum for students from kindergarten through high school.

Parents can help by setting boundaries at home, guarding against toys that claim to be a child’s best friend or tell them what to wear, Dr. Breazeal says. Children tend to internalize parents’ attitudes about technology by age 8, research shows.

Dr. Jipson at Cal Poly advises parents to help their children design, program or build the AI devices they use. ”Help children figure out that they can control these tools—that we’re the ones who created that ability, and we can also make the best use of it,” she says. Invite them to question the credibility of the information generated by AI-powered tools, she says. “They need to know that there’s the potential for error or, unfortunately, for deliberate manipulation.”

And watch your language. Dr. Jipson says has made a point with her two daughters, now 10 and 13, of calling robots “it” rather than “he” or “she.” 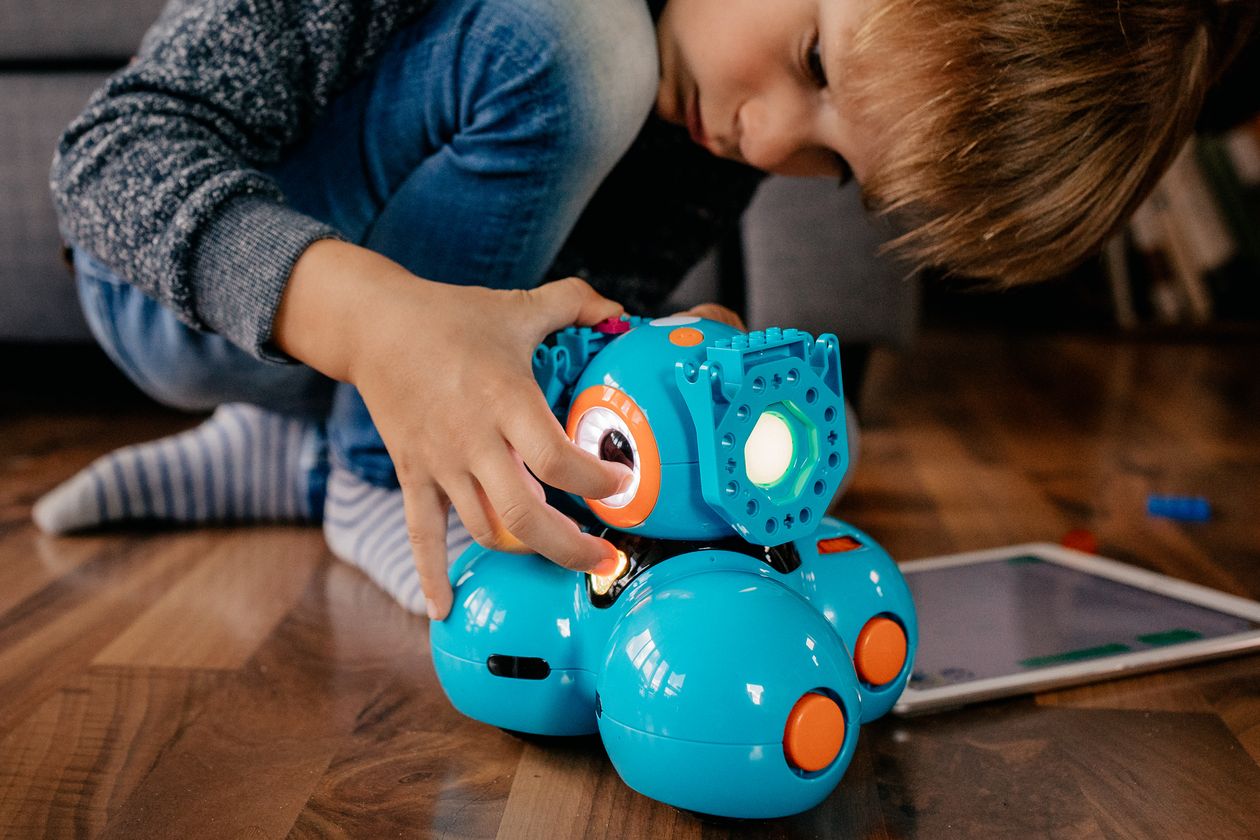 Dash by Wonder Workshop is a popular educational robot that teaches coding to children 6 and up. It can dance and sing and responds to voices and sounds. PHOTO: WONDER WORKSHOP

Children delight in controlling the devices when given a chance. Niko Merritt, a mother of four in Newport, R.I., tries to instill a fearless attitude in her children, encouraging them to experiment and have fun programming AI-propelled devices. Her 6-year-old daughter Gianna enjoyed playing with an educational robot called Dash at an after-school program offered by FabNewport, a nonprofit fabrication lab, she says. Gianna was excited to see that she could program the robot to act on her commands and do what she wanted it to do, Ms. Merritt says.

“She has plans to take over the world,” Ms. Merritt says, “and she plans to use a robot to help.”

How to Raise an AI-Savvy Child

* Use the pronoun “it” when referring to a robot.

* Display a positive attitude toward the beneficial effects of AI.

* Encourage your child to explore how robots are built.

* Explain that humans are the source of AI-driven devices’ intelligence.

* Guard against AI-propelled toys that presume too much, such as claiming to be your child’s best friend.

* Invite children to consider the ethics of AI design, such as how a bot should behave after winning a game.

* Encourage skepticism about information received from smart toys and devices.

Discover more about AI and Robotics!

Check our products page and start your lessons with RobotLAB and our learning Platform EngageK12! 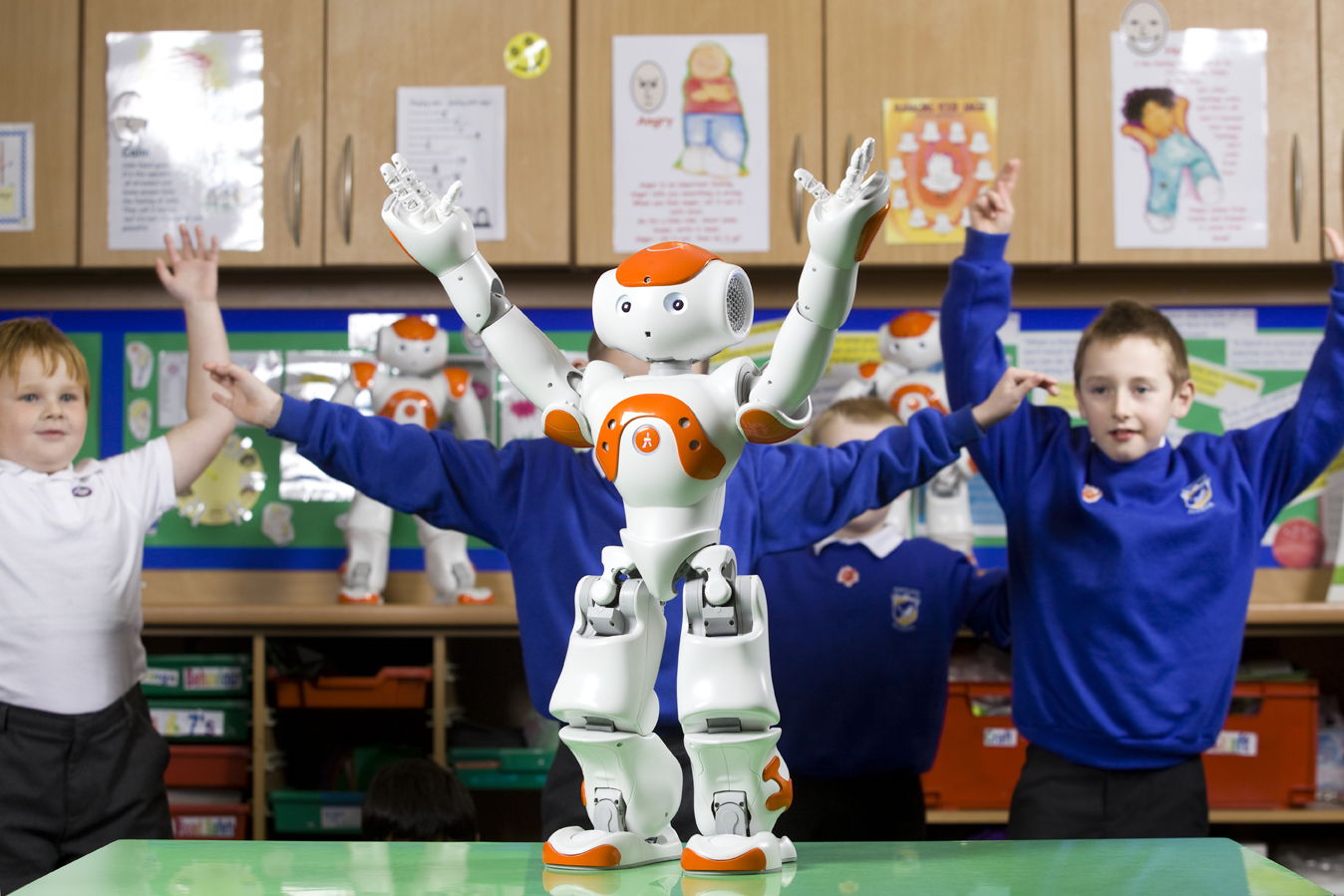 This article is original from The Wall Street Journal: https://www.wsj.com/articles/why-kids-should-call-the-robot-it-11566811801
1 Comments