Impress Your Guests Like Never Before! Introducing a powerful new business tool that makes it easy to:  Impresses visitors, shares stories, entertain guests and more.

PEPPER is an innovative and interactive robotic platform that drives traffic and enhances the customer experience.
The Host service allows you to develop Pepper Chat AI applications using Google's Dialog Flow and make the robot an integral part of your team by connecting it to the smart web. This Artificial Intelligence provided by Google will make every interaction relevant and to the point.

Pepper was designed to make his interaction with human beings as natural and intuitive as possible.
Hearing and Speaking Interacting and interpreting emotions wouldn't be possible without the 4 directional microphones located on Pepper's head. They enable him to detect where sounds are coming from and locate your position, while also allowing him to identify the emotions transmitted by your voice.
Seeing Pepper is able to function in complex environments thanks to his 3D camera and 2 HD cameras that enable him to identify movements, and recognize the emotions on the faces of his interlocutors. If you are happy, Pepper will share your joy, and if you are sad, Pepper will comfort you.
Connection Connected directly to the internet, Pepper can keep you up to date with the latest news, the weather forecast, or even help you to find a recipe! Don't hesitate to chat with him on the subject of your choice.
Tablet Pepper uses his tablet to help you make choices, but also to express his own emotions.
Emotion engine By perceiving and analyzing your emotions, and learning to get to know you, Pepper is able to adapt his attitude to suit your own as closely as possible. This constant dialogue between perception, adaptation, learning, and choice is the result of what is known as the emotion engine.
Control and balance Thanks to his anti-collision system, Pepper detects both people and obstacles in order to reduce the risk of unexpected collisions. Pepper is also able to maintain his balance, which stops him from falling if somebody knocks him over.
Movement and autonomy You will be amazed by the flexibility and fluidity of Pepper's movements! His 3 multi-directional wheels enable him to move around freely through 360°, at a maximum speed of 3 km/h. No less than 20 engines (head, arms, back) control his movements with great precision. Lastly, Pepper is equipped with a high capacity lithium-ion battery, giving him approximately 12 hours of autonomy.
High Definition vision Pepper is equipped with two high-resolution cameras as well as a 3D camera enabling him to effectively understand his environment. The images are processed by shape recognition software capable of identifying faces and objects.
Interpreting emotions Pepper boasts the latest technology, which means he is able to identify your emotions through your voice as well as the expressions on your face. Pepper reacts accordingly and is delighted if you are happy, or does his best to comfort you if you are sad. In addition to faces, Pepper is also able to recognize people by their voices. Thanks to his 4 directional microphones and his loudspeakers, Pepper is able to locate the source of sounds and engage in conversation in response.
A network of sensors Pepper possesses numerous sensors: two ultrasound transmitters and receivers, six laser sensors and three obstacle detectors placed in his legs. These sensors provide him with information about the distance of nearby objects (a range of 3 meters), in addition to his three cameras (two RGB cameras and one 3D camera placed in his head). Another sensor within the battery indicates its level of charge as well as its temperature. Pepper also possesses tactile sensors in his hands, which are used when he is playing games or for social interaction.
Linked to the world For autonomous internet access, Pepper is equipped with wireless connectivity 802.11a/b/g/n.
Welcome to the community A community of developers in Japan and throughout the world is imagining and designing new content for Pepper. The library of applications for this new type of companion is growing and evolving every single day. 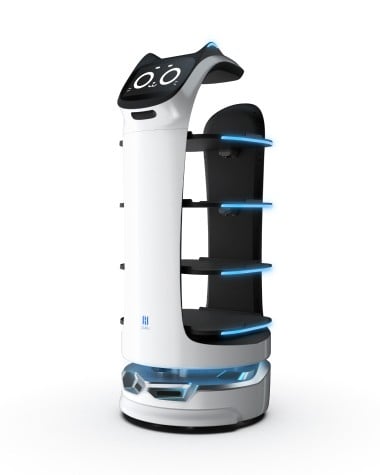 Pepper robot comes with two languages by default. The first language is always English, and the second language can be chosen by the user. Additional languages are available for purchase from RobotLAB The Pepper robot speaks and understands the following 21 supported languages:

RobotLAB offers different kits with Pepper robot. Please check the table below to compare what is available for each of the kits:

Please see the table below for the dimensions of Pepper Robot:

If you are experiencing issues with your Pepper robot:

RobotLAB provides:
The online training covers basic subjects to get you started such as: The more advanced training can be customized to the customer needs and includes: Contact RobotLAB for a training: https://www.robotlab.com/store/nao-training-professional-development

Pepper robot is a humanoid robot designed with the ability to read emotions. Pepper is used for research and education purposes. Please see the table below to know the different specs for Pepper robot:

The Pepper robot can be charged from any power outlet globally.

You can watch demos of Pepper Robot on our YouTube Channel:

Pepper Robot can be purchased from RobotLAB using the following methods:
Request for a price quote here: https://www.robotlab.com/request-a-price-quote-for-pepper-academics

What languages are available for Pepper robot?

What comes in the box with Pepper robot?

What are the dimensions of Pepper robot?

I’m having issues with my Pepper robot, what should I do?

Where can I get training for Pepper robot?

What are the specs for Pepper robot?

What is the voltage for Pepper robot?

How can I get a demo with Pepper robot?

How can I buy the Pepper robot?