NAO, a humanoid robot as a therapeutic mediator for young people with autism NAO and AUTISM whitepaper: a 44-pages study with contributions of renowned specialists in Autism disorders, find insights of years of experience of children interacting with NAO social robot. By David Cohen MD, PhD.

Autism spectrum disorder refers to a group of neurodevelopmental disorders characterised by difficulties with social interaction and communication and restrictive and repetitive behaviours and/or interests. The most striking difficulties are problems with imitating others, an inability to read others’ emotions, and limited initiation of and response to joint attention behaviours. These symptoms can vary in severity, resulting in different levels of disability.

For the moment, there is no treatment able to improve the quality of life of people with autism very significantly. Treatment is purely symptomatic and involves personalised educational therapy. This therapy is most effective when undertaken at an early stage of development.

In children and adolescents, all of these autistic traits will have varying levels of impact, depending on the support received, on their ability to learn, their socialisation and, later, on their level of independence as an adult.

We are seeing rapid growth in the use of new technologies in daily life, such as connected objects, humanoid robots, software and artificial intelligence, applications for tablets, augmented reality, virtual reality, etc. Applications (web or tablets) are still by far the most accessible solutions.

The existing studies in the scientific and medical literature since the 1990s show that children with ASD (autism spectrum disorder) have a great affinity for mechanical components, computers and robots. Robots do not judge, enable the child to hold their gaze and lead to an improvement in attention.

Today, the use of new technologies in autism treatment is built around four complementary approaches aimed at developing:


Therapy based on computers, tablets and personified robots is therefore offered more and more often for autistic children and adolescents. With the increasing sophistication of humanoid robotics, robots have been proven to have great potential as a therapeutic mediation tool in the field of cognitive disorders.

A number of researchers have shown that autistic children prefer interactive robots to static toys, that a machine appearance is less anxiety-inducing for them than human traits, and that they are more reactive to instructions introduced by a robotic movement than by a human movement.

More specifically, humanoid robots, which are anthropomorphic machines, allow the amount of information received by an autistic young person in their interactions to be ‘stripped down’, thanks to factors such as predictable and identical movements, a synthetic voice with no expression of personality and limited intonation, etc. Moreover, the robots are linked to a software component that makes it possible to simulate basic ‘social and affective abilities. This combination of characteristics generally facilitates a decrease in anxiety and better sensory receptivity in young people with ASD.

In a number of countries and for a number of years, based on this consensus on the value of humanoid robots in working with autistic young people, we have been seeing an explosion of specific research projects, empirical applications and software developments with or without AI, as well as the creation of pedagogical content.

Humanoid robots are gradually taking their place as genuine therapeutic mediation tools for young people with autism spectrum disorder; hundreds of robots are active as assistants in medical centres for autistic children.

Use the NAO Robot for your special Ed program to provide a bridge for children on the autism spectrum from isolation to greater social and academic engagement. 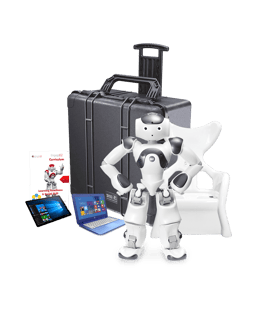