Human-Robot Interaction (HRI) is a new and promising field that has been gaining an increasing amount of interest by researchers in the field of autonomous robotics, as well as those in human-computer interaction [4]. Service robot applications such as delivering hospital meals, mowing lawns, or vacuuming floors, bring autonomous robots into environments shared with people [5]. However, human-robot interaction functions in these tasks are still at minimal level. Human-robot social interaction plays an important role in spreading the use of the robot in human daily life. In the course of effective social interaction, robots will be able to perform many tasks in the human society. These tasks may include, but not restricted to, handling various house duties, providing medical care for elderly people, assisting people with motor or cognitive disabilities, educational entertainment, personal assistance, giving directions at information points in  public  places, and many more [6].

Stereotyped and repetitive patterns of behavior, interests, and activities have been considered central to autistic disorder [7]. Based on study by Turner [8], stereotyped behavior is divided into “lower- level” behaviors characterized by repetition  of movement including dyskinesias, repetitive manipulation of objects, stereotyped movements and repetitive forms of self- injurious behavior, and “higher-level” behaviors including object attachments, insistence on sameness, repetitive language, and limited interests. These stereotyped behaviors are characterized typically by their cyclical and rhythmic environment [9] and have been acknowledged and studied in other human populations such as nursing home patients and drug addicts [10].

Humanoid Robot NAO is an autonomous humanoid robot developed by French Company named Aldebaran-Robotics [11]. This small size of humanoid robots is very smart and attractive for the interaction with ASD Children. It can be programmed autonomously and could perform verbal and non-verbal interaction during the Robot-based Intervention Program (RBIP). The Humanoid Robot NAO is being used in this RBIP because of his specification and promising capabilities [12].

Robot-based Intervention Program is an innovative intervention robotic program that will facilitate and augmentate the therapy for children with autism spectrum disorder. The intervention program utilizes the Humanoid Robot NAO as a main tool for the robot-based interaction. The Humanoid Robot NAO is 573.2mm height, 4.5kg weight and equip with 2 cameras, voice synthesis, voice recognition and powered by LiPo Battery.

NAO has 25 degrees of freedom from his head to his feet and each joint is equipped with position sensor. The 2 VGA CMOS camera (640x480) and four microphones are equipped   in the NAO’s head. The inertial unit consists of 2 gyro meters and 3 accelerometers and 4 Force Sensitive Resistor under each foot of NAO makes NAO able to estimate his current state. Inertial, bumper, foot contact, sonar, tactile touch and battery are the list if sensor that equipped Robot NAO. 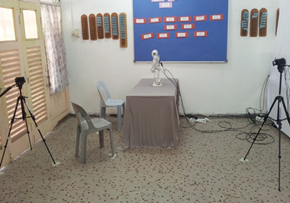 Fig. 1. Illustration of experiment setup for (a) RBIP Interaction Setup Area (b) layout of RBIP (c) Control Room during RBIP

Figure 1(a) illustrates the RBIP Interaction Setup Area, (b) layout of RBIP  and (c) Control Room during RBIP in  National Autism Society of Malaysia (NASOM). The experiments is equipped with 1 unit of Humanoid Robot NAO, 2 units of HD Camera, 1 unit of mini camera mounted at NAO’s chest, personal computer (PC), table and chairs. Selected 12 Autistic Children and their respective teacher is involve in the Robot-based Intervention Program. The interaction between the autistic children and the Humanoid Robot NAO is being observed and monitored by their respective teacher. The interaction time is limited to 14 minutes and 30 seconds for five different modules. There is a 30 second interval break between the modules. 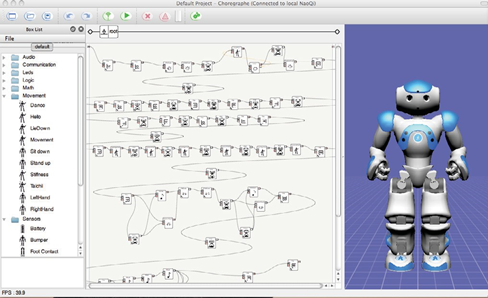 Figure 2(a) illustrates the experiment protocol for Robot-based Intervention Program. There are 5 modules that has been designed and autonomously programmed to the Humanoid Robot NAO. Figure 2(b) illustrates the Module Algorithm that  has been programmed in the Graphical User Interface (GUI) choregraphe and uploaded to the Humanoid Robot NAO for autonomously run.

Module 1 is known as introductory rapport module. The first section begins with a 45-seconds period where there will be no movement, speech nor music executed by the robot. This module aims to observe the child’s reaction to the presence of the NAO robot. The robot shall turn its head to the right, left and then back to facing the child. The head turning cycle will  be repeated continuously for 90 seconds. This is followed by a 15-seconds break. Finally, in the third section the robot’s   eyes LED (2 x 8 LED of RGB full color) will be blinking continuously with random red, green and blue colors for 40 seconds. After a 10 seconds break, the blinking sequence starts again for another 40 seconds.

Module 2 is known as NAO Talks. The module starts with the robot saying greeting the child to the Robot Based  Intervention Program. NAO shall continue asking the questions such as:

Fig. 3. Illustration of interaction in normal classroom for human-human interaction

The initial response of Stereotyped Behavior is being observed and evaluated in the behavior score sheet for RBIP and classroom interaction is referred on widely used autism screening tools GARS-2 (Gilliam Autism Rating Scale-2nd Edition)[13]. There are many criteria that have been evaluated in the behavior score sheet under the sub-scale score of stereotyped behavior. The child is being evaluated on the fundamentals of:

The evaluation is based on given score direction. There are as follows:

The evaluation is carried out by certified occupational therapist, clinical physician and certified psychologist based on interaction in RBIP as well as interaction in normal class session. Table 1 shows the number of children with their respective FSIQ and their Stereotype Behavior Score in RBIP and Classroom.

Table 1. Number of child with their respective FSIQ and their Stereotype Behavior Score in RBIP and Classroom 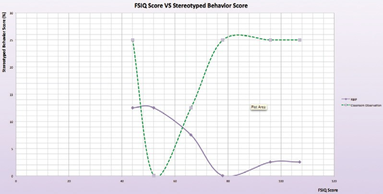 Moreover, figure 5 shows the relationship between score for Full-Scale Intelligence Quotient (FSIQ) score with the response of stereotyped behavior in the children with autism spectrum disorder. The pattern of the graphs shows that autistic children with Full Scale Intelligent Quotient (FSIQ) more than 65 percent exhibited lower stereotyped behavior score in Robot Based Intervention Program (RBIP) compared to the normal classroom interaction. The ASD children are considered mildly impaired (MI) for the FSIQ range score of 55 to 69 based on IQ test. So, for ASD children with a score that above   65, they are actually ready to be exposed in the robotics element in their therapy and they are more positive when interacting with the humanoid robot.

As far as the initial response of stereotyped behavior is concern, the ASD children with higher score of Full-Scale Intelligence Quotient (FSIQ) response with less stereotyped behavior presence in Robot-based Intervention Program (RBIP) compared to the normal human-human interaction in normal classroom session.

Based on the current results of Robot-based Intervention Program, the responses from the Children with Autism Spectrum Disorder is very promising and valuable for future work. Further repetitive exposure maybe needed for the lower FSIQ children to express  favourable  responses. Overall, children with ASD present more stereotype behavior in the classroom interaction and showed less stereotype behavior during the interaction in RBIP. Stereotyped behavior can be reduced and improvement can be made with more structured modules in Robot-based Intervention Program in the future work.

© 2012 The Authors. Published by Elsevier Ltd. Selection and/or peer-review under responsibility of the Centre of Humanoid Robots and Bio-Sensor (HuRoBs), Faculty of Mechanical Engineering, Universiti Teknologi MARA. Open access under CC BY-NC-ND license.

Ready to get started with your robot? click below to get get a free estimate, without any commitment"