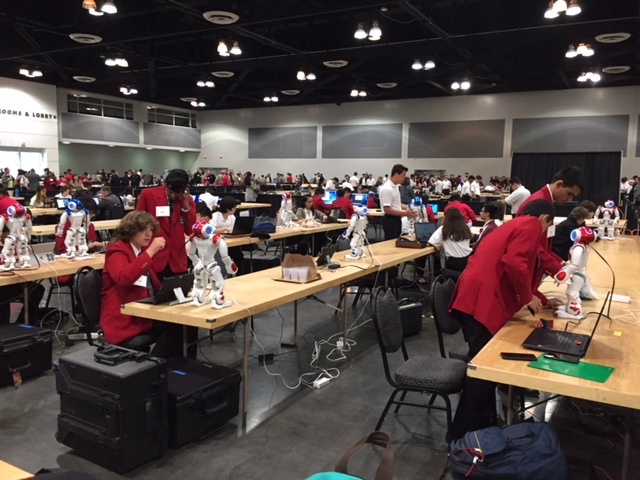 Mister Martin executes different tasks with the NAO robot. First, He make the NAO robot compete in the SkillsUSA championships with his students. Second, NAO robot becomes a recruiter for their engineering program while visiting middle schoolers. Third, NAO robot performs in some event for parents, and lastly, Mister Martin use NAO robot to perform in public events.

What Mister Martin and his students most love about the robot is that is easy to program, fun to work with and people react with interest in the demonstrations that NAO performs. “It’s an amazing and effective way to learn programming” he said. When he uses NAO for specific projects, these don’t last more than a month, but the SkillsUSA championship can last longer.

For Mister Martin the educational and social impact is that the kids and adults are interested, and the students want to work with it when they see the NAO robot around the school. Also, the community has shown a lot of interest in the engineering program thanks to the demos that NAO performs.

Mister Martin is thinking to acquire another robot this year. Mister Martin said “We want another one! This year we had two teams that had to share a NAO, and next year we’ll purchase at least one more, maybe two more. We love the NAO!