Math meets art -- are you inspired? 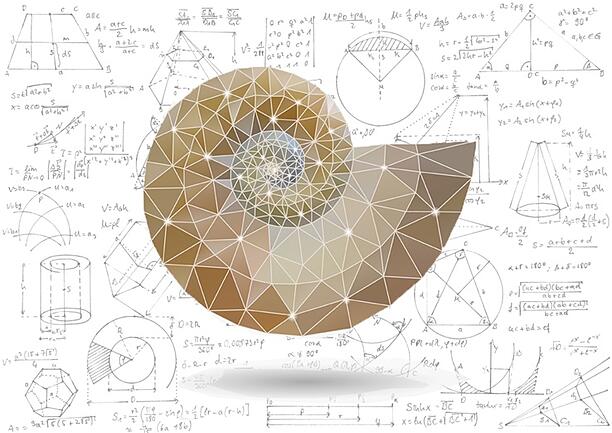 That math and music are closely related has been known forever. Music symbols (not cymbals) read like strangely designed math symbols -- or maybe the other way around depending on your orientation. A musical piece divides into measures and bars, which are further delineated by beats, and fractions are used to indicate the length of individual notes. What isn’t as well known is the relationship between math and the graphic arts. That math can be beautiful...

The first thing that pops to mind in those of us that made it as far as quadratic equations before heading to the other side of the campus, is graphs. While this writer never could find much to interest him in graphs, he had friends that seemed to positively drool over the more complicated ones (different sides of the campus but the same dorm). Maybe it was the way the various colored lines intersected?

More recently in 1998 (this writer’s last math class was in 1964), a group that styled themselves the Bridges Organization was formed to promote and oversee an annual Bridges Conference on the relationship between art and mathematics. First held in Kansas, the Bridges has since traveled to over thirty countries; it features invited speakers, paper presentations, educational workshops, mathematical poetry reading (which I find myself unable to imagine), and most importantly for our present discussion, a juried art exhibition which Discover Magazine has described as “...full of a staggering range of mathematically-inspired artworks, where you can see sunsets, lampshades, and more examples of the golden ratio…”

By the term “mathematically-inspired artworks” we take it to mean that these incredible images are not simply the amusing doodles of students with protractors, rulers and compasses driven to fanciful ennui by boring math lectures, but rather creations of talented, artistic mathematicians using calculations and numerical analyses as the basis for these forms. That being the case we can only marvel at what we see and agree that yes, sometimes math can be beautiful.