NASA thinks 3D printing is good enough for the space station, now how about your classroom? 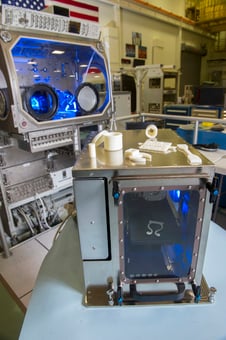 Building spaceships in space, that is the promise of 3D printing! Of course additive manufacturing technology of that magnitude remains far in the future, but the future begins this August when the first 3D printer, built by Made In Space and tested for safety and operational requirements, Al, is lifted to the International Space Station (ISS).

The orbital test of Made In Space’s 3D printer is part of the "3-D Printing in Zero-G Technology Demonstration" project. This project is part of a competitive Small Business Innovation Research (SBIR) program which encourages domestic small businesses, with government financial assistance, to engage in research and development that might prove profitable while advancing high-tech development in the US."Throughout our partnership with Made In Space, we have helped prepare the printer to work in an environment that is literally out of this world," said Niki Werkheiser, 3-D print project manager at Marshall Space Flight Center. "NASA engineers have a vast amount of experience designing and certifying hardware to operate in space. We were happy to share that knowledge with Made In Space. As a result, the hardware passed testing with flying colors."

The 3D printer’s initial testing for microgravity effectiveness was on “vomit comets” -- more euphemistically referred to as “reduced gravity flights.” When the printer arrives at the International Space Station it will be secured in a microgravity science glovebox (MSG). The MSG is a small enclosed area of about 9 cubic feet that allows restricted human access through glove ports ensuring that any unexpected loose pieces do not fly out into the general area and cause a safety problem.

The Made In Space 3D printer is a bit too small to make spaceships; at about the same size as RobotLAB’s own excellent MakerBot 3D printer, it has a print volume about equal to a shoebox. And it secretes acrylonitrile butadiene styrene (ABS) plastic, the same stuff they make LEGO blocks with. But it is still a great first step toward the goal of making parts and tools on the spot instead of waiting months for the next flight from Earth. No tool and die makers or milling necessary. Additive manufacturing technology is considered capable of more geometries than any conventional milling machine.

Another, more sophisticated 3D printer is scheduled to be sent to the International Space Station next year. No doubt it too will extrude only semi-hard plastics. But other substances are under experimentation, from metals to considerably harder plastics to incredibly dense ceramics. One day every part and tool in the International Space Station will be built in orbit and the first 3D printer-built spaceship will leave for the moon, Mars or the stars.