CUBELETS, the new robot digital teaching aid for K-4 by RobotsLAB, is much more than just an entertaining toy. The included digital curriculum makes it a fun and engaging way for younger students to learn procedural thinking, pattern recognition, abstraction and the experience of developing a step-by-step strategy for solving problems. 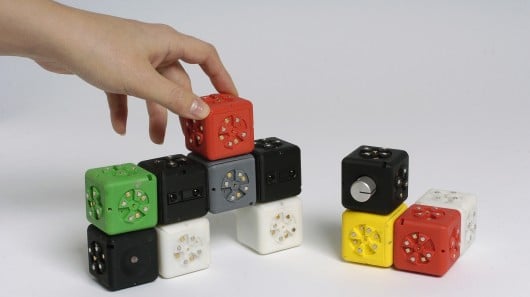 CUBELETS are small magnetic blocks easily and safely handled by children that snap together to form an endless variety of robots capable of responding with lifelike behaviors to light, sound, temperature and other environmental pressures. There is no need to connect wires or program, and yet these little blocks herald the approach to the classroom of the latest advance in the science of robotics,Swarm Intelligence (SI).

Swarm Intelligence, as depicted in the interesting video from Massachusetts Institute of Technology (MIT), is the attempt to create a population of extremely simple, individual robots that will interact with each other and their environment by following a series of simple rules rather than having a programed central control. The idea is that swarms of these small individual robots will act in the same way as biological swarming agents like ants, bees, fish, and bacteria to solve problems facing the swarm.

Fish, for example, swarm (school) in an attempt to confuse predators; there is no “big fish” leading the school. Although ants have queens, these royal personages do not serve as command elements as the individual ants go about solving the colonies’ problems. In the case of robots, it is hoped that in the future these small individual units with only the use of a few simple rules and no central command structure will be able to meet problems in the same way as do biological swarming agents, by individual units acting in unison without prior programming. First-responder robots could take on such form as might be most likely to allow them to save people from a collapsed structure: at first they might become long snake-like forms that easily navigate through the debris until they find the trapped victim; then morphing into powerful hydraulic jacks capable of forcing a way out of the rubble. And while SI robots of that sophistication are still well in the future, RobotsLAB's CUBELETS gives the youngest students a chance to work with their precursors.

Instead of spinning at 20,000 RPM like the MIT cubes, the blocks comprising a CUBELETS class are controlled by eager young hands and minds. And while every MIT robot unit is the same as another, every cube in a CUBELET has a different function. Some move the robot, some sense temperature or distance, some act like a flashlight. All fit together to make great robots.

Are you interested in a digital teaching assistant that any kid would love to get his hands on? We’re not talking screens here. CUBELETS form robots and the learning is anything but passive. Snapping them together to form a robot that walks or speaks or picks things up or whatever, is a learning experience that will keep young minds both entertained and engaged for hours.