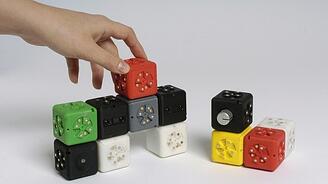 A Canadian teacher for instance was surprised how excited the kids in his elementary class were at the thought of getting their hands on these CUBELETS. They had watched a video and begged him to get some. What particularly surprised him was that it was June and getting warm and the kids were finding it difficult to keep their minds on schoolwork. He tested their resolve by saying that he would get some but they were going to have to do some writing after playing with them. To his surprise the students agreed to this extra class assignment.

The teacher let them play with the CUBELETS as they pleased. He didn't organize groups but the young students organized their own groups; some played in an organized fashion and some did not, but all seemed to enjoy but they were doing. At the end of the session he asked them to write down what they felt they had learned and what they thought others should know about these little robots. He was pleased with the results -- he says that he discovered that when young kids get to tinker they seem to learn better because they internalized what they learn. And even those kids with short attention spans remained engaged because of the ease with which robots could be constructed with these CUBELETS.

Elsewhere on the Internet another teacher mentioned how much his young students enjoyed CUBELETS; they were a perfect size for their small hands and easily manipulated. He thought his students gained an increased appreciation for teamwork. His school put up a wall to display pictures of things the kids have made in the past year. Several of the pictures showed robots made with CUBELETS.

As a final example of kids both enjoying and learning something from CUBELETS, please watch the video below as laughing children demonstrate a robot they constructed on their own:

From this and other reviews it is pretty obvious that kids love CUBELETS.