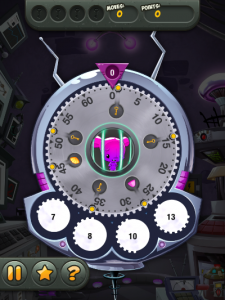 Dr. Keith Devlin (the NPR Math Guy and Stanford Mathematician) believes that anyone can become proficient in math if it is taught in a way that makes it relevant to them, and a perfect way to teach math to middle-school kids is with video games. He’s putting his money where his mouth is by starting his own video game company, InnerTube Games. According to InnerTube Games, the company doesn’t just build video games to teach mathematics, instead they build ‘instruments’ which are designed to be played; and playing with these instruments teaches the players mathematics. A bit like learning about music while playing the piano.

Wuzzit Trouble, the first game developed by InnerTube games, came out late last year. Wuzzits are imaginary little beings that look like tailless squirrels with a proclivity for getting trapped in cages in dark castles. It’s up to the player to get them out of these cages with keys found by answering puzzles.  That’s one level of the game. At another level the game is a device for acquainting kids with the mathematical concept of integer partitions. Integer partitions are whole numbers expressed as a sum of other whole numbers. The whole number 4, for example can be expressed in five different ways: 4, 2+2, 3+1, 2+1+1 and 1+1+1+1.

When asked by one blogger why Wuzzit Trouble was build around integer partitions, Dr Devlin said that “The goal was to design the game so that any action in the game was a direct action on numbers: adding, subtracting, or multiplying them, in increasingly sophisticated, algorithmic ways … and to do so in a fun and challenging manner." That being the goal, emphasizing integer partitions seemed like the best way to do it.

Of course we at RobotsLAB agree that gamification is the best way to teach math. We have moved to games that exist in the real, rather than the virtual world. Our MATHBALL, a digitally-enhanced basketball originally designed for perfecting the shots of professional basketball players in a systematic manner, is now available with an accompanying curriculum designed to assist teachers explain and illustrate Algebra through Pre Calculus. Math through basketball -- what could make the subject more relevant to certain age groups? It may come as a surprise to the gifted that such exciting subject matter as integer partitions and pre calculus need gamification to be palatable to the average kid; but those of us less mathematically inclined just wish we’d had a chance to play these games when we were young and in school.