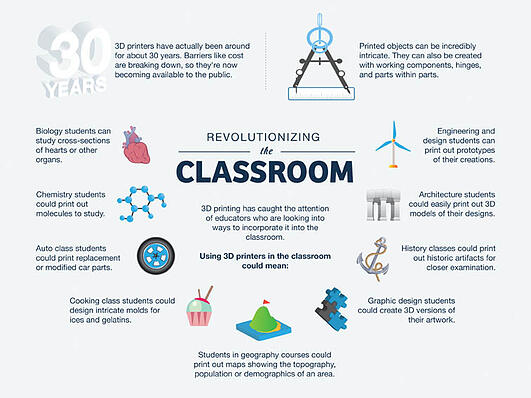 In February of this year, 2014, RobotsLAB, developer of the award winning RobotsLAB BOX and other innovative edtech digital teaching tools, launched the STEM-BOT 3D class, a revolutionary new way to teach engineering and computer science.  The provided curriculum shows students how to 3D print a robot, assemble it, and program it using the graphic programming language Scratch (‘graphic’ meaning teachers don’t have to go back to school to learn it).

And if you thought the first ten ways of using a 3D printer were exciting and useful, you’re gonna love the functionality of our eleventh. However interesting the process of forming molds or prototypes of real world objects might be, the printed objects are for the most part only 3D images of the real thing;  in other words, great classroom conversation pieces.

A robot, on the other hand, is a living, breathing (ok, I’m getting carried away here) ... lets say instead that a 3D printed robot is interactive. Not only can students display and talk about it as with the prototypes we mentioned, but they can also program it and make it do real robotic things like moving about and avoiding objects -- thereby demonstrating and teaching the mathematical, theoretical and technical skills necessary for employment in a number of STEM careers.