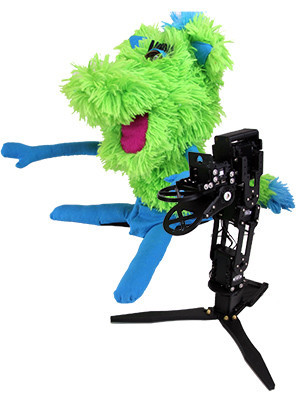 RobotsLAB salutes Shaun Cornwall, a SciTech teacher at Clark Elementary School in Issaquah, WA, whose courage and committment to his profession is only matched by his creativity!  Tired of using the school’s 3d printers making nothing but boring knick knacks, he printed a Christmas gift for his students that they can use--and abuse! A kids dream and a teacher’s nightmare.

When I was a kid in elementary school the only computers available wouldn’t have fit in our classroom and a printer was someone who probably worked at the local newspaper (remember those?). The only 3D technology we knew anything about came in cereal boxes, two-tone, paper and cellophane 3D eye wear that brought to life characters on the back of that cereal box. What we had in abundance, however, was spit wads and the means to launch them, rubber bands and straws. I preferred rubber bands myself as straws became waterlogged and unhygienic after only a few wet shots on goal--other students.  Teachers used to wait at the door after lunch confiscating any rubber bands and straws they might see.

I am sure a lot has changed in the last half-century, but I’d be willing to bet that a middle-schoolers’ proclivity for tormenting their fellow students with spit wads is not one of those.  Nor, I wager, has the average teacher’s desire to keep their classroom free of such attention-shattering activity.

But then, Shaun Cornwall is not the average teacher.  He was convinced that the useless knickknacks most teachers made with the school’s 3D printers were not fully conveying the importance of this new technology to his students. He decided to build something that they could and would use and give it to them as a Christmas present. He went to Thingiverse and found just the 3d template he was looking for, a desktop catapult.

A what?  That’s right, a catapult. A device described by the developer, Microsoft, as A small desktop catapult to launch projectiles at friends or coworkers.  Wha..!“ launch projectiles...at friends..!”   My first thought was  what teacher in his right mind would deliver a projectile launcher into the hands of a bunch of teenagers?

But then I got to thinking and I realized that what Shaun Cornwall had done was sheer genius! Sheer genius at a future cost to himself in frustration and exasperation, but genius nonetheless!  Because he was right about the problem he set out to solve: at present most schools present 3D printers to their students as little more than elaborate cookie-cutters for decorative objects: knickknacks.  When in fact, 3D printing is considered by many, including President Obama, as the future of manufacturing--and I can’t imagine a better way of presenting that to kids than the way it was done by Shaun Cornwall with his gift of 50 desktop catapults.

We wish more teachers would take the risks that Shaun Cornwall did. Some of his colleagues will probably complain from time to time when those catapults show up in their classes but the kids will always remember a cool teacher that built something new with some cool new technology.