A Grant from SF CEO to SF City Schools

"Mayors just dream of these opportunities."

That’s what San Francisco Mayor Ed Lee said after he and schools Superintendent Richard Carranza met with Salesforce.com (SF) founder Marc Benioff. What they were asking for was some financial support for the city’s 12 middle schools to increase technology access. They wanted money to purchase several hundred Ipads for students and training for affected teachers. They thought their request was reasonable if expensive. 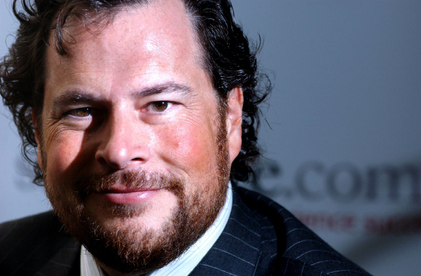 What they got was a surprise:  "You have to think bigger," Marc Benioff told them. At the end of the day what Mayor Lee and Superintendent Carranza actually walked away with was the Ipads they had originally asked for and a $100,000 grant to every principal at the 12 middle schools. The total donation came to almost three million dollars!

What was more startling, "We wanted to make this bigger," Benioff said. "The city and school district weren't ready for us to do more."  Why not? "I know that I don't want to take his money and waste it," a surprised Mayor Lee said. "You want to make sure it has the kind of impact it deserves.”

How much bigger? Well, Benioff says he wants to make those 12 middle schools the best middle schools in the entire country. And he says he’s got the money. "All the city has to do is tell us what they want," Benioff said. "This will not be our last grant." He asked the mayor and the schools Superintendent to come see him again next year with a bigger request.

Don’t we wish every school system had a patron like Mark Benioff!

But don’t despair if  your school isn’t among the lucky dozen!  STEM learning is on a roll and there are many other grant sources out there just waiting to hear from you. For a list of those sources please click here!

Of course we at RobotsLAB hope some of these lucky middle school principals will take a look at the RobotsLAB BOX developed right here in good-old SF.  As a means of engaging students in math and technology, we believe there is no better edtech teaching tool on the market than our BOX.  How better to teach quadratic equations, for example, than watching them unfold on the BOX’s tablet while flying the BOX’s robot helicopter? And that’s just for starters!