We often talk about STEAM adding Art to STEM. The skills needed in STEM and Arts are similar and the study of these two different fields can teach both creativity and logical thinking. Arts can be also used to attract young adults that otherwise won't be willing to learn any STEM subject. More than that in the experience described, a concrete fun and engaging application ( paiting or creating some art ) serves as a live example of why Math concepts are needed and how we can find math in dawing a line.

Technology helps us understand how interconnected the apparently disparate elements of our reality actually are. The arts and sciences, once disciplines completely at odds with each, other are swiftly becoming more and more compatible--and more fun! 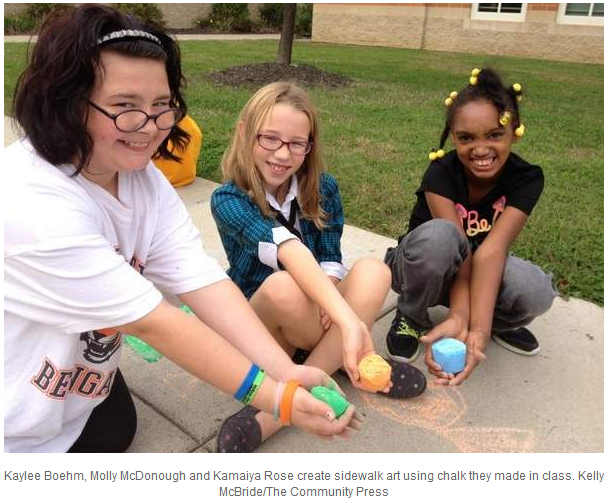 Ever hear the phrase, “It’s an art, not a science?” Art usually meaning the act of creating as a painter on canvas or a sculptor on rock.  A science, on the other hand, is understood as a series of immutable laws to be discovered, not made.

At least that was the case until such great minds as Planck, Einstein, Bohr, and Heisenberg began science’s great descent into the micro world where the one immutable law seems to be change. Change as abrupt and violent as any splash of color on canvas or strike of steel on rock. Change brought about by nothing more than the passive attention of an observer.

Carver took those science concepts and taught the students how to make chalk, using tempera paint and plaster of Paris.

Then, they took the brightly colored chalk outside to create sidewalk art on Oct. 15 and Oct. 17, incorporating a math lesson in fractions as they drew characters using circles, half circles and varying degrees of pie shapes, in the minimal realism of artists Charley Harper and Ed Emberley..

The same vision is behind the creation of RobotsLAB BOX, demonstrating abstract concepts via concrete applications ( the robots ) and then use the concepts in the classroom!