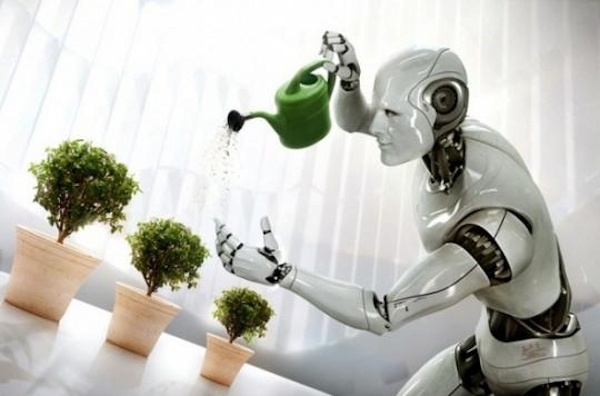 Stephen Hawking, Bill Gates and Elon Musk worry that artificial intelligence (AI) might spell the end for mankind as the dominant being on this planet. Maybe, if environmental collapse doesn’t get to us first...and then just maybe AI might save us.

And so I thank the earth,

For giving me the things I need:

The sun and the rain and the apple seed;

The earth is good to me.

John Chapman (September 26, 1774 – March 18, 1845), often called Johnny Appleseed, was an American pioneer nurseryman who introduced apple trees to large parts of Pennsylvania, Ohio, Indiana, and Illinois, as well as the northern counties of present day West Virginia. He became an American legend while still alive, due to his kind, generous ways, his leadership in conservation, and the symbolic importance he attributed to apples.

The rhyme is part of a song sung by Dennis Day in a Walt Disney production of the Johnny Appleseed Story, circa 1948. The prose is from an Internet article on the Wikipedia, circa about now.  While Disney used a good bit of poetic licence telling the story, there was such a man as Johnny Appleseed and if you’re interested you can find his grave behind a rusting metal fence at the edge of a park in Fort Wayne, Indiana; at least you could have 30 years ago. We can only hope it wasn’t bulldozed under for more parking; the earth might have been good to us but lately we haven’t been all that good to the earth and we are sadly lacking committed conservationists like John Chapman.

Every year humans cut down between three and six billion trees; that’s “billions,” not millions. In the United States alone we take down nearly a billion. And that’s not including those lost to fires and other acts of nature. In mankinds’ defense,  we do try to plant more than we cut down: more than a billion and a half here in the States. Problem is, replanting is neither as profitable or as fun as chopping them down and a lot of seed and seedlings go to waste. Keeping up with the cutting down means some trouble must be taken to insure they take root; simply broadcasting seed with a wave of the hand might suffice for a lawn, but not for trees. Johnny Appleseed was certainly aware of this, and apparently took pains that the trees he planted survived.

Since Johnny Appleseed is a long-time dead and the carbon based organisms that have replaced him seem determined to denude the planet of trees (and themselves of oxygen), it is comforting to know that their silicon-based creations (robots) are about to step in and remedy this unbalance. Johnny Appleseed’s dream is about to be undertaken by some even more tireless beings.

Word of these particular robots comes out of the U.K. where a company called BioCarbon Engineering has developed a plan to use drones to plant trees. These drones consult “high resolution 3d maps” of the intended reforestation area before buzzing out and performing what BioCarbon Engineering describes as “precision planting activities” including shooting pre-germinated seed pods “encapsulated in a nutrient-rich hydrogel” into the soil with pressurized air. Later the drones will assess the results and take such actions as might be needed to improve them. The developer claims their process will save up to 85% of the cost and still plant vastly more trees than any comparable human-reliant system.

Lately science Titans like Stephen Hawking, Elon Musk, and Bill Gates have been predicting doom for mankind if he continues on his present course to artificial intelligence. AI is certainly one of a number of possible avenues to armageddon, but environmental collapse appears likely to arrive first. Intelligent robots may be our only salvation...Johnny would understand.