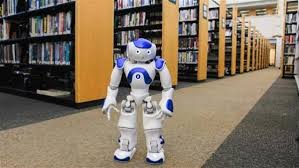 I can remember the indignation I felt the first time I found video tapes in the public library; a desecration, I thought! Libraries are for books, not light-weight, made-for-tv documentaries!  I kept holding my nose when I walked by those shelves until I missed Ken Burns’s documentary The Civil War on tv and the only place I could find it was...you guessed it, the public library. Alas, virtue once lost is virtue overcome and I found myself welcoming the computer into the library (a screen search beats the old card system any day), and absolutely thrilled with the coming of the Kindle; so the idea of anthropomorphic robots on the library floor doesn’t bother me at all.

Like it or not, public libraries are in a competition with the internet for information-delivery relevance. The internet delivers text and imagery with a speed the library cannot; public libraries, on the other hand, can deliver the real thing. Watching a video about robots is interesting, but actually interacting with one is both interesting and fun--just ask any kid!

One of the first libraries to acquire these tradition shattering mechanical beasties is the WestPort Public Library in Westport Conn.  The Westport library has broken the mold before; specifically, by  setting up a “Maker” space for its patrons and installing a 3D printer,  technology that President Obama has referred to as the “future of manufacturing.” Now, the library intends to introduce its patrons to robots. "Robotics is the next disruptive technology coming into our lives and we felt it was important to make it accessible to people so they could learn about it," said Maxine Bleiweis, executive director of the Westport Library. "From an economic-development perspective and job- and career-development perspective, it's so important."

The robots, named Vincent and Nancy, are “Nao Evolution Robots,” the latest model NAO robot created by the French robotics company Aldebaran. Standing about three-feet high and looking a bit like the anthropomorphic robot C-3PO in Star Wars, they have a mild, calming way about them that has made them an important tool in teaching autistic children. They are not simple windup toys with a limited behavioral repertoire; besides walking and talking, they recognize faces, can detect where sound is coming from, touch, feel, and avoid obstacles; more, library staff and patrons can program them to do all sorts of entertaining and even practical things, like help find books and meet children arriving at the library. Says Alex Giannini, the library digital-experience manager, "I don't know what the coolest functionality is going to be. Someone coming in off the street is probably going to teach us that."

Nao robots in libraries is a novel development (no pun intended), but these robots are by far the most popular robots used in science education and are found in schools worldwide. Many of these engaging robots have been sold by RobotsLAB along with lesson plans designed for students of all ages. Teachers interested in presenting their classes with an educational experience their students will remember for ever can find more about NAO at our website.