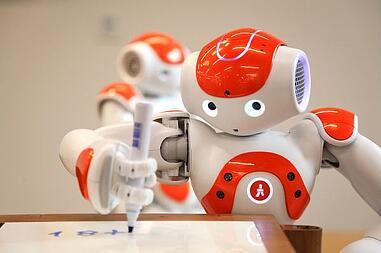 Wondering how to teach a kid to write? How about helping a kid teach a robot to write?  Committed teachers have been saying forever that they learned more from their students than they learned from them. Might this have the same profound effect on students working from the teacher’s perspective?

I don’t have the answer to this riddle. The question simply came to me when I stumbled over this great picture of the French company Aldebaran’s anthropomorphic robot NAO hovering studiously over a digital pad seemingly writing an earnings report for the Associated Press. Looking stiff with the pencil at an uncomfortable angle and totally focused, doesn’t NAO look a lot like a kid learning to write?

Actually the blog post with this picture is talking about robots that look less like humans and more like computers. But how better to illustrate the point that computers are freeing humans from boring jobs?  NAO, after all, is the most widely used anthropomorphic robot for educational and research purposes.

Not only anthropomorphic, but autonomous also. Which brings me back to the question about NAO as a possible student and the student as a teacher. In my experience kids like to act like teachers. I know I did, and I can remember my youngest teaching to an attentive Jack Russell Terrier. NAO is programmed to be even more attentive than the Jack Russell--and speaks better English--and French, German, and dozens more. NAO is better disciplined also and won’t interrupt the teacher with barking when the doorbell rings.

NAO is a favorite with us here at RobotsLAB. We put a great deal of effort into  developing curricula that

provides NAO with the ability to keep kids engaged in learning. While writing copy for the AP is a stretch at the moment, it is certainly only a matter of time.