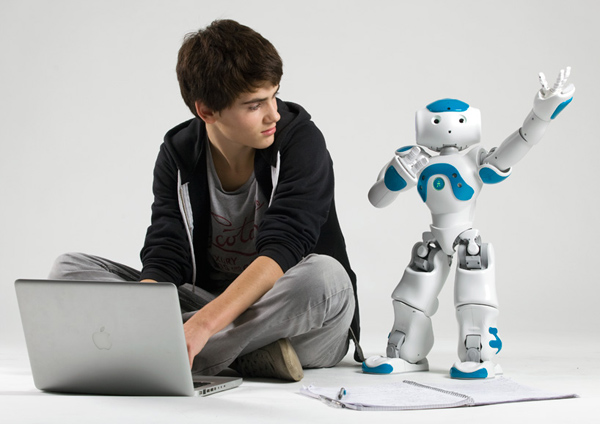 Although Aldebaran’s robot NAO is far and away the most popular anthropomorphic robot used in education, there are still too few of them to go around. As yet, school systems are more interested in getting a tablet into every child’s hand rather than a robot. A shame it can’t be both as there is recent evidence out of the Robotics project of  Carnegie Mellon University that suggests that kids are beginning to view the computer as a bit passé and computer programming downright boring. But few school systems have the bucks for both.

Realizing this, Murray State's Kentucky Academy of Technology Education has created a program for schools that meets both the NAO shortage and the developing engagement deficit head on. Accepting reality as in “If the mountain won't come to Muhammad then Muhammad must go to the mountain," Murray State overcame the NAO shortage by creating a virtual NAO simulacrum that behaves exactly as the actual NAO when kids program it on their too-familiar computer screens or tablets.

Programming with tools as fun and easy as drag-and-drop and as detailed as C++ and Python, the young students get to watch the NAO simulacrum behave as they program its actions on screen. Later, when one of the few actual NAOs in that  school system is available at their school and in their classroom, they can use that very same program to animate it. This process seems to work wonders as area educators report that students that once held back are now stepping out as leaders and 80% of the kids that take the course are reportedly inspired to take more STEM courses.

Robots like NAO inspire kids to take more STEM courses because they keep them engaged as no other teaching tool can. Kids watching them behave at their behest suddenly find themselves feeling  as if the math that up to now they never found relevant has suddenly come alive.

We here at  RobotsLAB provide NAO and a number of other anthropomorphic robots like BIOLOID and DARwin-OP--along with their included curricula-- that can keep a classroom full of otherwise easily-distracted kids interested in math for an entire class period--and beyond.