Madison-Oneida BOCES district purchased a programmable robot named NAOmi this past year and its impact is being felt in many schools. Laurie Yager, the Tech Integration Specialist for the Mohawk Regional Information Center, says the $16,000 investment is paying off, "We do have a second one on order, so she is going to have a brother sometime this summer, so we will have two devices." 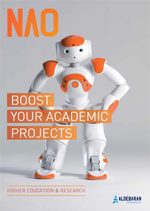 The Mohawk Regional Information Center serves the Madison-Oneida BOCES district -- Mohawk is one of 12 statewide information centers which provide participating districts with access to state-of-the-art technology, services, training and support for teachers, students, and administrators.
Yager says Naomi recently made a visit to a 6th grade math class at Richfield Springs Central School, "They programmed her to move across the floor through an XY Coordinate plane that we had mapped on the floor."
One of the classrooms where Naomi may be having the most impact is in the special education classroom at Hamilton Central School.  That's where 9 year old Max interacts with Naomi for about two hours each week.
Special Education teacher Kelly Stewart works with Max, who has autism.  Stewart says Naomi is really helping Max communicate, "She helps him a lot with the eye contact.  He's working a lot on the communication piece and she does a great job with incorporating that into his everyday routine with things he likes.  He has a connection to it.  It draws him in, and there's something about it -- it's predictable and he knows what to expect so that's very helpful for him."
Besides Max, Hamilton Central School 11th grader Nicole Ganung is also benefiting from Naomi. Ganung has been programming the robot to personalize Max's interaction. Ganung says it's been a lot of work, but has definitely been worth it, "It's kind of scary because I don't know whether he's going to communicate or not, if he is having a good day or a bad day. But he has communicated very well.  It's amazing, I love seeing that because it shows me that it's worth something."

Yager says the cost of the robot from the manufacturer is going down from $16,000 to about $8,000, so Madison-Oneida BOCES is excited to buy a second one. and Hamilton Central School Director of Technology Dennis Roy says the cost reduction may make it feasible for his district to buy its own robot to be used next year.