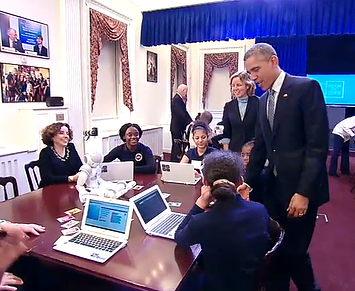 “Hi NAO! Last year, students and teachers across our country celebrated Computer Science Education Week with an Hour of Code. They learned new skills, programmed games and apps, and realized that while no one is born a computer scientist, becoming a computer scientist isn’t as scary as it sounds. With hard work, and a little math and science, anyone can do it.

For this year’s Computer Science Education Week, more than 48 million people have already participated, and we’re hoping even more of you will get involved. Don’t just consume things, create things.

Take an hour to learn more about the technology that touches every part of our lives. That’s how you can prepare yourself with the skills you need for your future. And that’s how you can help prepare our country for the future as well. Americahas always been a nation of tinkerers, builders, and inventors.We brought the world everything from the lightbulb and the telephone, to the iPad and the Internet. So whether you’re a young man trying his hand at programming for the first time or a young woman who is already hard at work on the next big thing, we’re counting on you–America’s young people, to keep us on the cutting edge. Thanks NAO, and happy coding!”

Wow eh?  Who’d a thunk a robot-- Oh, you don’t believe this? Good for you! We kinda hoped you wouldn’t. No, actually this is the text of the speech President Obama gave the day before to open 2014’s Hour of Code. What he really opened the speech with was “Hi everybody!”

This silly subterfuge with the riddle was nothing more than an attempt to draw your attention to the fact that our buddy NAO was a guest at the White House. I mean, when was the last time you were there? NAO is apt to be seen anywhere these days.

Hey, just last January he was on Mars helping the astronauts master the finer points of communicating with robots! Well, Ok, that was Utah, an analogous Mars with analogous astronauts, but that’s about as close to Mars as we’re gonna get for a while and NAO was there with us!

One more riddle… Check out the image below. Do you think NAO and VP Biden were talking 2016? 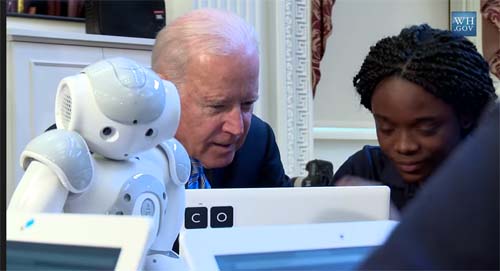