What Can We Do About Math Anxiety? 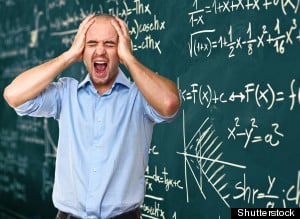 Parents, are you feeling guilty about inculcating your children with that educational scourge, Math Anxiety? Take heart, it might not be your fault. According to a recent study at Ohio State University, there is a genetic component to the malady. Says lead author Zhe Wang, “We found that math anxiety taps into genetic predispositions in two ways: people’s cognitive performance on math and their tendency toward anxiety..."

Which leaves us wondering, what can be done about math anxiety in teachers and students if math anxiety is genetic?  I’m not a teacher and I haven’t been a math student for nearly half a century, but as a parent (Ok, Ok, a grandparent!) I’m relieved that yet another potential, parental guilt trip has been resolved in favor of nature rather than nurture.

In actuality of course, as in most nature vs nurture issues, the genetic component in those individuals suffering it is less than half the problem--less than 40% in this case. Meaning there is still a lot that can be done to overcome math anxiety. Recently voiced ideas include the three following from two university psychology professors, Sian L Beilock of the University of Chicago and Daniel T. Willingham from the University of Virginia:

Here at RobotsLAB we believe there is yet a fourth way to reduce math anxiety in kids. We think that making math entertaining is a great way to get them interested and keep them engaged. This doesn’t mean teachers have to hire a clown. No, there are now a number of edtech aids available that previous generations of teachers would have loved to have had access to, including our robots. Kids love robots and robots have the ability to demonstrate the relevance and importance of math in a manner no lecture, book or blackboard can. To get an idea of what our robots can do for your students take a look at what we have to offer on our website.