This year the Soccer World Cup will be played in Rio de Janeiro, Brazil. The crowds, as always, will be huge. After all, everyone wants to go to Rio de Janeiro and a World Cup is as good an excuse as any. The first game  will be on Thursday, June 12th, between Brazil and Croatia.  Those of you who dislike crowds might want to miss this competition; but don’t worry, if you’re looking for an excuse to boogie on down to Brazil there is an even more important soccer event occurring a month later a little north of Rio in João Pesso. I'm referring, of course, to RoboCup 2014 -- the Robot Soccer World Cup!

Actually João Pessoa is more than a little north of Rio -- 1,223 miles north, to be precise. But that means three hours less flying time in a cramped airplane seat. And if you can believe the image on the Internet, João Pessoa appears to be on a bay as beautiful as Rio’s. More, it’s reputedly a safe city...a claim Rio de Janeiro certainly can’t make!

What takes place in João Pessoa in mid July is less about soccer than it is about the future.The RoboCup has been played annually throughout the world since 1997. The founders hope that a game as popular and difficult to play as soccer will serve to promote and draw the public to robotics and AI. First played at Nagoya, Japan, it took place last year at Eindhoven, the Netherlands. Until 2009 Sony's four-legged robot AIBO was the "standard platform" -- but Aldebaran's NAO has been the standard platform for the last five years (you might say Homo Sapiens is the standard platform in the more well-known World Cup). 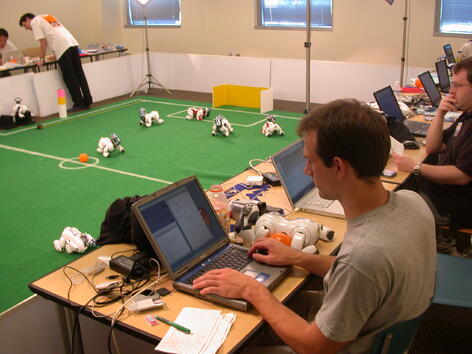 RoboCup enthusiasts believe that someday a RoboCup soccer team will defeat a human World Cup team. At the moment that might seem impossible as NAO’s kicking ability is a bit limited.  Still, how many of us ever foresaw a future when a DEEP BLUE would defeat a Gary Kasparov or a WATSON a Ken Jennings?  It isn’t impossible that a future Robot Pelé is forming even now in some young robotics engineer’s fertile mind as he or she labors happily in their STEM learning class.