In preparing for battle I have always found that plans are useless, but planning is indispensable.

Using an Education Week report from 1989 that stated that “technology planning is clearly a weak area of endeavor” as a baseline, she analyzed state plans for what she considered likely key components in any edtech development plan, student learning objectives, professional development goals for teachers and adequacy of staff support. What she discovered must give us pause: As I have found, that lack of thoughtful planning in the 1980s still exists in the present day. While the problems schools and educators face have evolved, the planning done by each state has not.

Ms. Wilhem’s report comes with a map of these United States that shows that a clear majority of states have no updated plans currently available. Check out the color scheme on the map below! In fact only 19 states have plans that extend beyond 2012. That’s two years ago, folks! Some states like Virginia, Ohio and Maryland come in for praise. Others, including Iowa, Montana and Missouri admit they have no intention to plan past 2012. 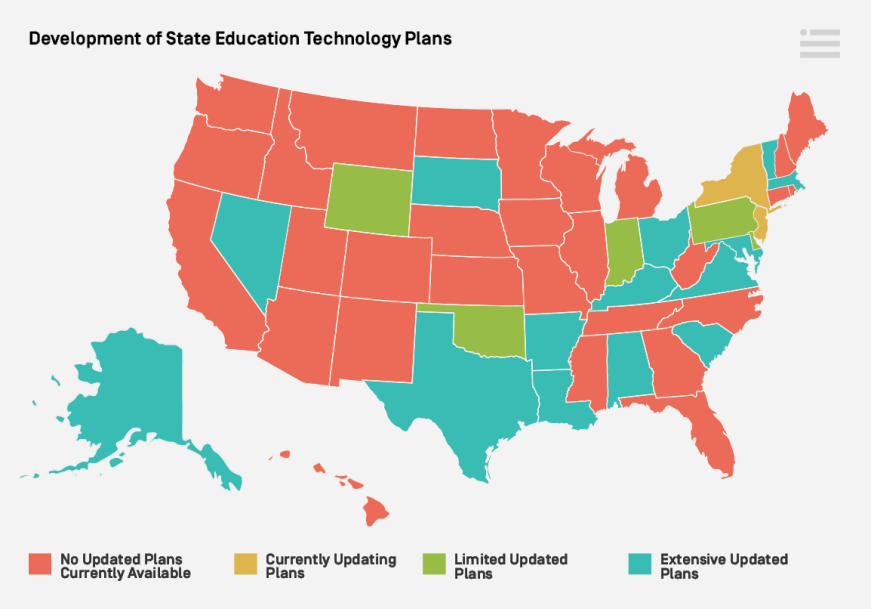 Why is this happening?   Ms. Wilhem gives us two reasons she thinks most states seem uninterested in planning ahead. Reason number one is the decision in 2011 by the US Department of Education to eliminate the Enhancing Education through Technology (EETT) program, the largest federal incentive for state-level planning. Reason number two is pretty much the same as reason number one, except the funding authority is the Federal Communications Commission. The FCC is still funding with its E-Rate program, but not requiring proof of planning.

Keep in mind this doesn’t mean these laggard states are necessarily forgetting about funding for educational technology while they ignore planning for it. I believe it would be safe to say that all of them intend to keep their schools competitive in the new edtech paradigm.  What is does mean, however, is that they are no longer approaching financing edtech in a systematic way. I mean, it’s hard to imagine that the entire West Coast, awash as it is in technology firms, won’t continue to update their classrooms.  What will probably happen, however, sans prior planning, is a lot of wasted money on poorly thought-out programs.