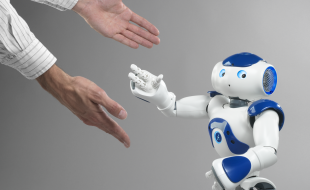 Me, being a believer in the robot as a teaching tool,I was at first a little put off by the title of a recent article in the Boston Globe, STEM's Newest Darling: Robotics; a bit cloying, I thought.  The subtitle, It’s the 21st century’s newest must-study subject, came across as patronizing.  I felt certain my favorite machines were in for a verbal drubbing. And guess what, after reading the entire article I've decided my first opinion was almost entirely wrong!  Error! Error! Will Robinson!

Oh, I guess I could still fault the article writer for his off-putting approach in the title, but I certainly can't complain about what he had to say about robots and education; it was highly complementary and informative.  It's good to see that Massachusetts, the home of the Massachusetts Institute of Technology (MIT), really gets it. Maybe it was the fear that Massachusetts, certainly one of the most progressive states in matters of education, didn't get it, that put me off at first (Ok, Ok, I won't use any further renditions of the term 'off-put' in this post!).

Anyway, Massachusetts does seem to be a hotbed for STEM learning using robotics. An elementary school in Boston’s oldest community, the North End, plans to use robots in Kindergarten classes. And the “inventor-in-residence” (a PHD from MIT) at a private school in Brookline where they intend to integrate programming into all the classes K6-12 says, “robotics is not about building real-life C-3POs, quasi-humans… Instead, it’s a way of combining sensors, computer programming, and actuators to solve problems in the physical world.”  The president of  Worchester Polytechnic Institute, Laurie Leshin, has this to say about the importance of introducing robots early in a student’s career and sticking with them: “Second- and third-graders get this stuff inherently,” she says. “By the time they get to middle and high school, life has beaten out of them some of that interest, and I think robots are a way to get that back.” We couldn’t agree more!

The one disagreement I still have with this article comes near the end where the author says, “The last and maybe biggest challenge, as schools try to start programs, is teachers.”  The author quotes the principal of a Boston K-8 school that says it is difficult to add robots to a classroom “unless you have a person who has expertise and is motivated.”  The best teacher is always a motivated teacher, but we here at RobotsLAB would argue that a motivated teacher who lacks expertise in robotics should not be held back.  Any well-motivated teacher skilled in their own discipline, be that math, science, engineering or whatever, will find themselves capable of engaging and educating their class from day-one with nothing more than the material we provide with our robots.