Why Do Americans Stink at Math? 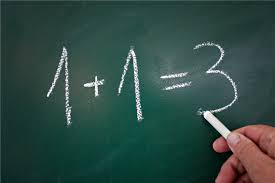 A 2012 study of adults in 20 countries found that Americans ranked near the bottom in numeracy. Numeracy being defined simply as the ability to work with and understand numbers. What’s worse is that other studies showed that even the most educated among us displayed a deplorable inability to work with numbers: almost twenty percent of medical prescription  showed math mistakes on the part of doctors and pharmacists. How can this be?

Why Do Americans Stink At Math is the title of an article written by Elizabeth Green for the New York Times Magazine on Sunday, July 23, 2014. The thesis is that the deplorable state of math education in the USA is the result of poor carry through on the part of our most highly placed educators.  In spite of attempts to change the teaching of math by engaging students in actually studying math rather than memorizing it, the change is not happening. As evidence of this failure Ms Green relates the story of a Japanese educator who used math-teaching theory and methods developed in the USA to improve Japanese schools by engaging students but found these same theories and methods either ignored or misunderstood and misused in American schools. That Japanese educator  thinks “Americans might have invented the world’s best methods for teaching math to children, but it was difficult to find anyone actually using them.”  Again, why?

According to the article, American educators in the most important and influential teaching colleges don’t actually spend a whole lot of time teaching; they are into research and publishing. The result is great theory but poorly communicated methodology with the teachers actually teaching students. Common Core Standards provide us with a recent example of this disconnect.

Explains Ms Green, “With the Common Core, teachers are once more being asked to unlearn an old approach and learn an entirely new one, essentially on their own. Training is still weak and infrequent, and principals — who are no more skilled at math than their teachers — remain unprepared to offer support.  Magdalene Lampert, a professor of education at the University of Michigan notes “In the hands of unprepared teachers, alternative algorithms are worse than just teaching them standard algorithms.”  What results, of course, is confusion leaping from teacher to student to parent. A sequence Ms Green illustrated with this amusing anecdote:  The comedian Louis C.K. parodied his daughters’ homework in an appearance on “The Late Show With David Letterman”: “It’s like, Bill has three goldfish. He buys two more. How many dogs live in London?”

Textbooks haven’t really made the jump to Common Core either. They have  “have received only surface adjustments, despite the shiny Common Core labels that decorate their covers.”  On the textbook issue, no less a personage than Phil Daro, a senior member of America’s Choice and one of three principal writers of the math Common Core Standards agrees, “To have a vendor say their product is Common Core is close to meaningless…”

It is not necessary to agree with every point made in this article to agree with the overall conclusion so succinctly implied by the title, that Americans do indeed stink at math.  And there is no doubt that teaching methodology must be greatly improved if we in this country are to retain our technological superiority. Engagement, not rote learning must be encouraged.  Our goal here at RobotsLAB is to provide teachers with technological aids, our robots and included curricula, that will engage and encourage students to study rather than memorize.