Why do I need to learn math?

An inspiring video created by WeUseMath.org team, featuring some of the brightests minds, and how they use math. 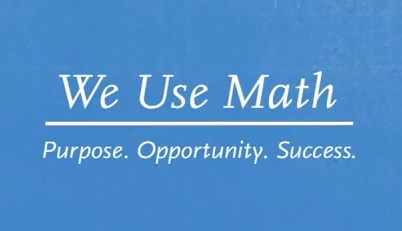 WHY DO I NEED TO LEARD MATH – 10 VERY GOOD REASONS

Gus Hart: Why study math. When you know mathematics you can do anything that you want.

Jessica Purcell: It’s really satisfying to finally understand something that nobody has understood before.

Jeff Stewart: There’s always going to be a need for people with Math.

Jeff Stewart:It’s a language just like being good at English and grammar, and the better you are at it the further you can go with it.

Jessica Purcell: I actually think that in a lot of cases, Math is really ugly but it’s very fun.

Ira Pramanick: You can make a lot of difference in this world if you study Math. Because it gives you the basis to do all kinds of new things, to make all kinds of discoveries and make an impact in your life, in the life of your family and friends, and to those many other people you’ve always wanted to help.

Speaker 1: In eight years your whole life’s going to change and the important thing in eight years is what doors are open for your career.

Tyler Jarvis:             When you’re done with your degree you’ve got your pick of jobs. Lots of companies want Math makers and you can choose where you want to go, who you want to work for.

Zachary Vorhies: Math is the foundation to all these different sciences and knowing that allows you to choose what it is that you want to do because the door will always be open. You can be like a programmer like myself or you can build bridges or you can put molecules together or learn how to like make new drugs or you know even synthetic life forms.

Helen Moore: I take data that shows drug concentrations in patients and tumor volumes and take that data and try to figure out the model that fits the data and then use that model to optimize the drug doses.

Dennis Tolley: All the people that are under 60 when they get to retire there’s not going to be any, you can’t just get admitted to a hospital because you can’t pay for it. Well, is that true or not? What can we do about it? Those are health issues that we are addressing now mathematically.

Carol Meyers: I’ve worked in actually a number of different areas, in the areas of homeland and security, in stock pile stewardship, in cyber security, and also a little bit on sort of general algorithmic research.

Ira Pramanick: I currently work at Google and the Google analytics back end. Google is all about large scale, data and processing it’s really hard to take a complex problem and think about solving it or even simplifying it unless you have that background and the training in Math.

Shane Reese: I’ve spent time at the Los Almos National Laboratory where I worked a little bit on nuclear weapons research and trying to assess probabilities that our nuclear stock piles going to be safe for example.

Dan Faissol:You could go work for the center for disease control and try to eradicate diseases using mathematical models. So if you do like Math then you’re in luck because in the future it will be more and more in demand.

Carol Meyers: Yes,Math is hard. I don’t think there is any Mathematician out there that does not find Math hard. But the thing is Math is also really interesting and so it compels you to get over the hardness and actually try to figure out new things.

Shane Reese: I think that Mathematics is one of those things that you can grind it out, you can, and if you’ve got this intuitiveness to stick you can succeed.

David Bailey: It’s worth doing. It’s something that, I’ve never heard anyone say, “Oh I wish I didn’t take so much Math.”

Xabier Garaizar: Don’t be shy thinking that well this is only for people who are super smart, that’s bogus. Math is accessible to everybody.

Dan Faissol:So if you are frustrated hang in there. One day you might end up loving what you’re doing and it’s all thanks to Math.

Helen Moore: The Mathematics really feels good when I do it. There’s a certain part of my brain that gets really happy when I do Math.

Tyler Jarvis:So recent study of the 15 most lucrative careers for college grads shows that all 15 of them had 1 thing in common and that was Mathematics. If you want any one of those jobs you have to understand Mathematics.

Jessica Purcell: In order to really make a difference in the world somehow it feels like the more that you know the better and especially I’m a little biased but the more Mathematics that you know, I think the better.

Gus Hart: Well, you know people that are good at Math and that get a job or you got to think like a Mathematician does or use your critical thinking, those are jobs where you know, you get to interact with people, and you get to make a difference in the world. One of those jobs where instead of just punching in and punching out and saying “phew” my 8 hours is over today. It’s something you look forward too. I love to go to work in the morning. I am excited on the way in. I can’t wait to tackle todays’ problem. That’s the kind of job you want to go to. And they’re paid better than the ones that are harder to go to. Who wouldn’t want to be paid well and have something you enjoy doing.

Learn how you can engage students in math using the latest and gratest EdTech tools - robots: