Some grandfathers have everything they need: a full-featured, available, caring network of spouse, kids, grandkids and pets to look after them and be looked after; some,unfortunately,don't.

And yes, grandmothers as well as grandfathers are included in this discussion(No sexism tolerated on this blog; although we walk on the grey line past the censors from Time to time).

Sure, the fact that they are grandparents means a network once existed; but it's no secret in this world of ours that these networks don't always function very well. Even grandparents--old but still human--get divorced; kids move to the other side of the country; grandchildren,if their grandparents are lucky, go with their parents. Dogs and cats are the next best thing to family, but they, like every carbon being, die. And all too often the old are forced by circumstances beyond their control to live where pets are unwelcome. So, family out of town? No pets allowed? It's time to think about getting a robot! 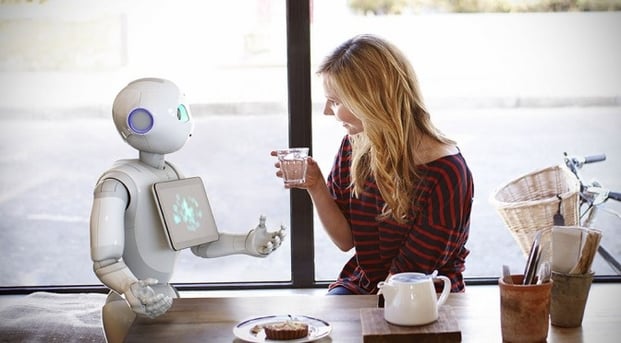 But not just any robot. There are dozens of them out there. Doing everything from cleaning floors to shooting pool. What you need is a personalized robot: one to empathize, sympathize, and entertain; in short, A robot to make grandpa feel better when, like Eveyore the perpetually depressed donkey in Winnie the Pooh, he's feeling "lowdown, lonely and blue."

Recently The perfect such robot was offered for sale in Japan. The first thousand units of Pepper, the newest robotic creation of the French company Aldebaran--offered in Japan by Softbank robotics--sold out in one minute. As you are probably aware, the Japanese are under threat of a rapidly approaching demographic crisis: this nation noted for the quality care given it's elderly will soon find itself with insufficient young people to look after them as they have in the past. The Japanese consider robots to be at least a partial answer to this coming problem.

Pepper robot is aimed at grandpa's emotional health. He or she – – take your pick – – serves as a friend and not a servant. Pepper doesn't do dishes and can't clean up around the house, but Pepper can tell when it's owner is depressed and in need of some sort of emotional support. Pepper's many sensors, incredible algorithms, and cloud support, can determine its owners emotions at any point in time. It then attempts to adapt to them: if sad, perhaps a hug or the playing of their owner's favorite song; if happy, simply listening and commenting along with the owner.

Like a good speech recognition program, Pepper was designed to get better with practice. By "better," we mean more attuned to the emotions of its owner. It's mannerisms, it's body language, even it's vocabulary will be determined by that of its – – dare we say it?– – Significant other.

Currently the only place you can purchase a pepper robot is Japan. The price is at the moment under $2000 with a monthly charge for updates and cloud support. Pepper is scheduled to be sold in the US in 2016. There's a lot of old guys out there that could use one! Maybe one of those old guys – – and gals, of course--is related to you.