How Much Is That Pepper Robot In The Window?

Drooling over images of Aldebaran's Pepper robot now being sold in Japan and hoping I’ll have saved enough to get one by the time it arrives in the United States next year, I found myself humming an ancient ditty I haven’t heard for a very long time: How Much Is That Doggie In The Window? And why that particular song, you might ask? Well, it kinda fits! Read on! 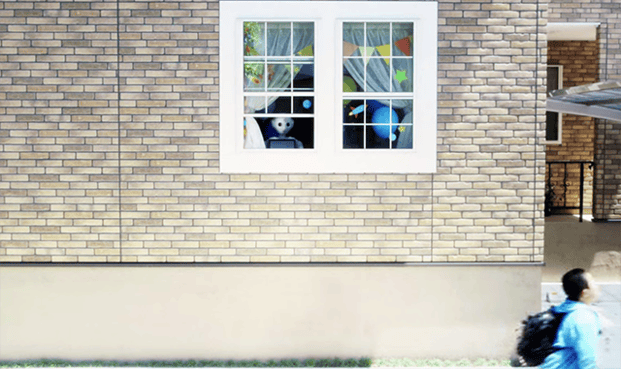 For those of you who just recently “fell off the turnip truck” and weren’t around to hear “That singing rage, Miss Patti Page” when she first sang How Much is That Doggie In The Window in 1953, here’s a chance for you to go “Platinum” with a new rendition of the song…How Much Is That Pepper Robot In The Window? I’d sing it myself but I think someone younger and better looking could take it a lot further...

As you can see the problem here is going to be rhyme. In the original, “ waggly tail” rhymes with “for sale.” But poor Pepper doesn’t have a tail; so I was forced to innovate--and Pepper is a lovely shade of pale. Of course rhyme isn't the only thing holding this song back from going platinum: no, window shopping is so last century! Maybe the first line should go like this "How much is that pepper robot on eBay?" Or maybe, "online." Unfortunately both words simply cause more rhyming difficulty.

The next verse gets a little easier. Sixty-two years ago Patti sang,

I must take a trip to California
And leave my poor sweetheart alone
If he has a dog, he won't be lonesome
And the doggie will have a good home.


The second verse is a lot easier to change and makes even better sense: Pepper, you see, was created to recognize emotions and to empathize with them. What better company to leave your lonely sweetheart with! I’ve always thought that the real reason for leaving your sweetheart with a puppy was to keep them too busy cleaning up after the puppy to run around on you. Anyway, here’s my rendition of that second verse:

I must take a trip to California
And Leave my poor sweetheart alone
If he has a robot, he won’t be lonesome
And Pepper will have a good home

See, I told you it would work. Now the third verse is same as the first; I’ll let you do it yourself. Verse four, on the other hand might need some work...

Or maybe not! Just replace “doggie” with “robot.” Pepper is capable of making small talk with humans; surely barking like a big dog couldn’t be all that hard to program! Verse five is the simplest of all for us to work with. No change is needed!

See what I mean? Pepper doesn’t exactly walk, but he can follow you on his special wheels while talking and revolving around and around--something not even a human companion can do without getting violently ill.

So you see what I mean here? All this wonderful old song needs is someone that can sing to bring it up to date. And don’t worry, I won’t expect royalties.

Oh, and by the way, the answer to the question How Much Is That Robot In the Window...Online...Ebay? Less than $2000!