Using 3D printer, every student can be a maker 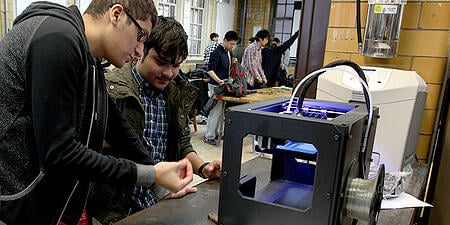 Educators, do you find yourself sceptical about the claims made for 3D printers as valuable teaching tools?  I know I have been and I was educated when manual typewriters were the highest tech you were apt to see in high schools. As a freshman, I thought I wanted to go into engineering, but when I took a course in mechanical drawing and found myself pathologically incapable of drawing a straight line I left the engineering route forever. After reading about the experiences students had with 3D printers at Brooklyn Technical High School I lost my scepticism regarding these printers and began to wonder... if they’d had these printers when I was a boy would I have stayed in engineering?

Brooklyn Technical has a long history of teaching success in the STEM field; I guess you could say it was teaching science, technology, engineering and math before they became STEM. Brooklyn Technical graduated its first Nobel Prize winner in 1922, George Wald co-winner of the 1967 Nobel Prize in Biology for discoveries concerning the primary physiological and chemical visual processes in the eye. In 1947 they graduated Arno Penzias, one of the discoverers of  cosmic microwave background radiation which famously allowed cosmologists to confirm the Big Bang; he won the Nobel Prize in Physics for that discovery in 1978. Today Brooklyn Technical is the largest STEM specialized school in the nation.

Brooklyn Technical offers majors in sciences as diverse as biomedical engineering and architecture.  All freshmen are required to take a course in Design and Drawing for Production. This year there is a Makerbot Replicator 2 Desktop 3D Printer in every design and drawing classroom (my old nemesis, mechanical drawing has been replaced by Autodesk Inventor). Every student will 3D print at least one object before the school year is over.

In a recent video, Brooklyn Technical teacher, Tom Curanovic, talks about how the Makerbot has changed the way they construct projects. Where everything was once done on a lathe and took several days, a Makerbot produces the object in mere minutes.He notes that the 3D printer has interested a wider group of students than ever before and supervising their work is much easier and safer than with the heavy equipment once needed for this work.

Educators, please set aside your scepticism long enough to look at 3D printers as educational tools. Brooklyn Technical in New York City is a great example of an old school that is using new technology to widen student participation in STEM learning.