What Is Wrong With American Education?

As with everything else the question is best answered by "it depends!" In this case it depends on who you ask. 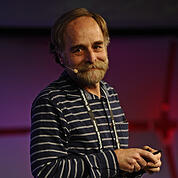 Ask many reformers and they’ll assure you there is plenty wrong as shown by the poor showing American students make on international standardized tests. We can not completely ignore that.
But ask Scot Osterweil, a professor at the MIT Media Lab, and he will tell you that he believes educators need to worry less about standardized tests and work harder toward inspiring students' natural creativity.

American students were behind in 1957 when Sputnik burst upon the scene.
After 12 years of intensive pressure to train more engineers and mathematicians, they still lagged behind many other first-world nations when Americans showed “the right stuff” and landed on the moon.
And today, after schooling the generation that gave us the personal computer, the Internet and Silicon Valley, Americans are still fretting about test scores instead of reveling in our unparalleled record of technical creativity.

Here at RobotsLAB we're not ready to call for the abolishment of standardized tests, but we do think that a greater emphasis on creativity would help improve our competitive position worldwide.
Our RobotsLAB BOX, for example, is a teaching tool that can improve both tests and creativity.
The BOX contains robots that the students can interact with.
Nothing seems to inspire kids like robots!