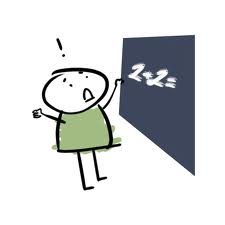 Of course the answer to the question posed by the title of this article is simple: Adults!
Adults instill in children their own feelings about certain learning disciplines like math and science.
Studies show that children tend to follow the lead of the same-sex parent where learning is concerned. Mothers discouraging daughters, fathers discouraging sons.


But both are guilty of perpetuating harmful stereotypes with comments like "girls are usually better readers", or "boys do better at math!"
Teachers, in spite of their training are often guilty of the same mistakes when working with kids.

This isn’t done maliciously.
According to Elizabeth Gunderson, a researcher at the University of Chicago in a recent article for the journal Sex Roles, it isn’t even done consciously.
Passing on our own negative feelings about particular academic disciplines is a bit of family life as everyday in nature as passing-on the common cold.
We’ve all done it. Who among us hasn’t grimaced painfully when faced with a child’s unfamiliar homework? Who hasn’t whined either "go ask your father, I never liked algebra", or "ask your mom, I could never spell?" As for teachers, another study shows that undergraduates majoring in education admit that math is the subject they are least comfortable with.
This attitude can’t help but show up later while teaching other peoples’ kids.

So the real question is what can we do about our attitude toward these...unloved subjects, particularly math and science?
Experts say, and it sounds right, that we have to do more than watch our language--although that’s a good way to start.
Our kids know when we’re blowing smoke. No, we actually have to demonstrate our eagerness to learn what our kids are learning while they are learning it--admittedly much easier said than done.

But in the case of math anxiety at least there is new hope for beleaguered parents.
Not long ago it was nearly impossible to convince a kid that math was relevant to his life; everyday things like smartphones, tablets, computers and robots have changed that.
These same common tools can also be used to engage kids--and parents--in learning math procedures they once blew off.

Our RobotsLAB BOX is a perfect example of something parents and children can enjoy working with together while they learn.
Instead of rolling your eyes and grimacing when your daughter or son approaches you with a question on quadratic equations, you can watch the equations unroll on a tablet in front of you both while flying a robot helicopter.
You might not be able to convince yourself or your progeny that math is easy, but you can demonstrate it to be anything but boring!