Alvin Toffler on keeping up with change in the 21st Century 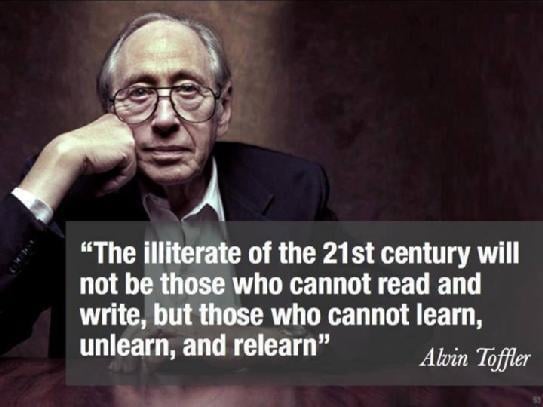 Although this quote is attributed to famous futurist Alvin Toffler, it seems impossible to discover when he said it -- if he said it -- prior to it appearing on his website. A web search for its source uncovers controversy, nothing conclusive. Some bloggers believe it to be a paraphrase of something he said in one of his books; others are less charitable and believe it should be attributed to another author altogether.

It doesn’t matter who said it; the quote seems a cogent one, particularly as it relates to robots and educational technology and their combined effect on teachers and students -- the basic subject matter of this blog.

Robots, whether anthropomorphic like NAO and BIOLOID or specialized like AR.DRONE, are shaking up education in this country, particularly in the disciplines revolving around science, technology, engineering and math (STEM). In the past, math and science teachers could teach with only minor changes from the same textbook year after year; which says more about the technology available to them at the time than it does about the individual teachers or even the system itself (systems usually get the blame for everything).

But the minor textbook changes have now become major technological changes that for the first time in the history of math class promise to interest and engage more than just the studious and talented students while leaving the rest of the class behind to transmit math anxiety on to future generations of students. And the robots that are on the leading edge of this technological change require teachers willing to accommodate those changes with the necessary training -- and by learning more about the science of robots in general.

The first robots used in an educational setting were little more than expensive toys programmed in advance of the classroom and as with earlier engineering advances like personal computers serving as inspiration for those talented few who could imagine a future in math and science; to operate these robots a teacher needed to do little more than push a button or two.  Then along came robots like NAO that were classroom programmable and interactive as well. The teacher’s role grew exponentially; they had to have some programming knowledge in their teaching toolkit.

Another exponential jump came with the recent arrival of such robotic teaching tools as the RobotsLAB BOX. More than interactive, anthropomorphic steel, plastic and silicon beings, these robots actually serve as math and engineering teaching assistants by allowing students to experience equations in action rather than simply writing them down.  Such robotic specialists as the 3D printer -- only recently offered at prices affordable to individuals and schools -- help students create other robots using the principles found in the STEM disciplines, but also require updated teacher training.

The argument continues on the web as to who first came up with the idea that illiterates in the 21st Century will be subtly different from illiterates before them: maybe it was Alvin Toffler and maybe it wasn’t. Doesn’t matter; it appears a sound concept. Never before in history have technological advances arrived with such bewildering rapidity. Educators in particular are challenged to “learn, unlearn, and relearn” both their subject matter and the teaching methodology needed to keep their students competitive in a world becoming increasingly reliant on STEM learning. Perhaps teachers would be well advised to keep their eyes on one increasingly important component of the new technology -- robots.