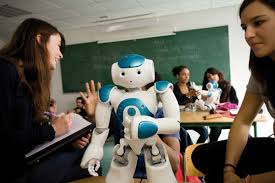 “Klaatu Barada Nikto,” that’s robot talk for...well, several things, including “don’t destroy the Earth” (I’m paraphrasing here, but that is a line from the 1950 Sci-Fi thriller, The Day the Earth Stood Still).  It seems that GORT, a huge and immensely powerful robot has been brought to Earth to teach mankind a lesson; i.e., “either quit fighting among yourselves or I am going to get rid of you all before you become a danger to other planets.” And only moments before he teaches mankind  that violent lesson, along comes Helen Benson, played by Patricia Neal, who utters the fail-safe phrase that began this paragraph and ends GORT’s rampage.

Fortunately, NAO, today’s premier teaching-robot, responds to English--as well as French, Japanese and most other languages. And while GORT had a bad attitude and stood fifty-plus feet tall, NAO stands less than four feet and is so unthreatening that he is welcomed as a friend and teacher by autistic children. NAO has one other advantage over GORT: there’s a lot more of them; in fact, NAO is by far the most popular robot for educational purposes.

In spite of NAO’s small size, he is of immense value to education. No STEM learning academy is more aware of that than techJOYnt in Oklahoma, City.  In the movie, GORT pretty much stayed in one place while he decided what to do; NAO, part of techJOynt’s mobile STEM lab, teaches mankind all over Oklahoma City, from Rockwell Plaza to satellite campuses at Oklahoma City Community College. He is part of the techJOYnt’s Humanoid Robotics course.  He helps students study Node and Python programming using touch and motion sensors; and as as mentioned earlier NAO also helps autistic students communicate.

One thing both GORT and NAO have in common is their ability to engage students. Kids love robots. Can’t keep their eyes or their hands off them. That’s why we at RobotsLAB are so pleased to partner with techJOYnt in seeking to put even more of them into schools.

GORT’s presence was enough to get an important lesson across to mankind (a lesson, I might add, that recent news indicates we didn’t learn very well).  NAO’s presence is less imposing and the curriculum more varied. According to Ray Shaik, President and CEO of techJOYnT, “By using the NAO robot in class, students connect theory and practice, develop teamwork and communication skills, and gain a higher level of motivation and interest in technical career paths.” We earthlings have every reason to hope that the results will be more lasting.