Student Robotics and the K-12 Curriculum

Having been involved with student robotics programs for many years, I feel that robotics just may be the most perfect instructional approach currently available. It offers classroom activities that teach high-value STEM content as well as opportunities to powerfully address ELA Common Core Standards. In fact, there are connections to robotics across the full spectrum of the curriculum. Robotics is also a highly effective way to foster essential work skills like collaboration, problem-solving, and project management. It does all this while keeping kids so motivated and engaged than getting them to stop working and move on to the rest of the school day can be a challenge -- a good problem to have!

The next important step for student robotics will be to make it a central part of the regular, daytime classroom experience. Here are some favorite activities that can help robotics inspire and impact all students, and can also tremendously increase teacher satisfaction.

Robotics can work its magic even for early elementary students. One approach that I love establishes a strong connection to English language arts using LEGO’s WeDo Construction Sets. Students build robots to help them understand the characters and plots of books they read. Story analysis and comprehension are greatly enabled and enhanced. For example, in some classrooms reading the well-known children's book Zach's Alligator is accompanied by building an alligator robot (or robot of another character) and then retelling or expanding on the story. And of course, in designing and building their creations, students learn basic engineering and electronics, and practice math, too.

This same approach of using robotics to focus and enable descriptive, explanatory language can work in higher grades, too. The Common Core ELA standards indicate that students should be able to effectively present knowledge and ideas verbally. A great example of this can be seen below in the "Adventure Story Design Challenge," a video of classwork by Frieda Gress at Elgin (Texas) Middle School. She says, "Kids love using the WeDo kits to make animals 'come alive' and to invent and tell stories. These are those moments of joy that we teachers live for."

What about robotics without kits? There's great value in having students focus on how they would design a robot, and then explain and illustrate their ideas and design decisions. Students can apply science concepts they've learned, such as identifying the simple machines integrated into their robots. This could be done with pencil and paper, of course, but for a technology-supported twist, try using one of the numerous "Build Your Own Robot" games to be found online. Save the finished designs (do a screen capture) and then have the students explain their ideas about what their robot will do, how it will work, and why they designed it as they did. You'll find a number of these games online (one appealing example is Build a Robot3).

One aspect of digital age learning that is essential to prepare students for the evolving 21st century workplace is collaboration. Teachers, however, are often hard pressed to to make this happen effectively. A great example is the collaborative work of my colleague Ian Chow-Miller of Frontier Middle School in Graham, Washington. He has an imaginative robotics project called The Wave. His students all build identical robots, but must then program them to "perform" together as a group. His video "Period1WAVE" (below) shows his students' excitement and collaborative shared purpose as they demonstrate their success in making their robots do something truly impressive. Ian states, "Making your robot move forward a certain amount is relatively easy; figuring out how much time to wait so you come back simultaneously with all the other robots who may have gone further/stopped later than you is difficult. And once you figure it out, we generalize a formula so that it can be applied to all the robots, even if we doubled the amount of robots in the room."

Tug of War Robots is an exciting activity that taps students' natural love for competition and channels it into solid science learning. Luke Laurie, a science teacher at El Camino Middle School in Santa Maria, California, makes robotics an important part of his eighth grade science course, stating, "I've discovered that when my students are designing and building tug o'war robots, they're applying the science concepts of forces and motion. They're thinking about friction, gravity and speed, while they run test after test to design the best pulling machine . . ."

My friend Gary Israel, long-term coach of the 2TrainRobotics team of Morris Campus High School in the Bronx (New York City) agrees that designing and building robots to play ball is one of the more exciting challenges his team has tackled. 2TrainRobotics competes annually in the FIRST Robotics Challenge (FIRST has an event for elementary and middle school students as well). These competitions focus on robotics-based STEM learning, professionalism and sportsmanship.

Shooting hoops or retrieving soccer balls is something that all kids can understand and appreciate. It's an engineering design and construction challenge they can visualize and sink their teeth into. Also, the robot actions are based on observable human body engineering that they can relate to physics concepts. The team's video gives a good idea of the sophistication of their robots.

A final video that I find absolutely inspiring is "Educate to Innovate: High School Robotics" from the White House website (the robotics segment begins at 15:39). It shows high school students demonstrating the robot they built to President Obama. I think it points the way to a wonderful robotics challenge for all kids: design a robot that will capture the imagination of an adult you respect, a robot that will demonstrate what you can imagine and do, a robot that, as President Obama put it, "is proof of the extraordinary promise of American young people."

Discover more about Robotics with RobotLAB 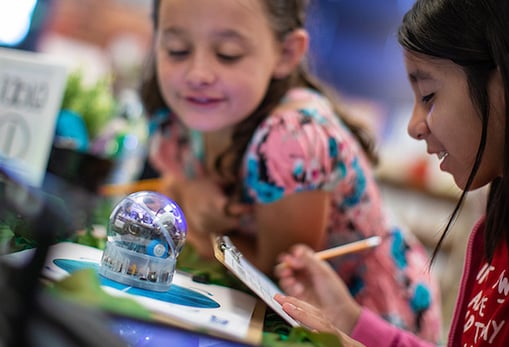