The importance of ensuring America’s continued competitiveness with STEM

The Great Recession began in 2007 and ’by the numbers’ ended in 2009. "By the numbers" meaning "technically". The Misery Index and unemployment have remained high in spite of this technicality. Why is that do you suppose? Is it possible there has been a change in the economy at a fundamental level not responsive to rising housing prices?

Could it be that the workplace itself changed so greatly during this period with the explosion of mobile computing devices like smartphones and tablets that the available jobs no longer reflects the pool of trained, unemployed job seekers? According to Sidharth Oberoi, chief academic officer at Zaniac, that’s the case. He writes, "A closer look at U.S. unemployment statistics shows that even with unemployment still at historically high levels, large numbers of jobs are going unfilled. Most of these jobs have one very important thing in common — the need for STEM education". He says further data suggests that while there are 3.6 applicants for every available job in the US, there is only one unemployed STEM worker for every two available STEM positions. 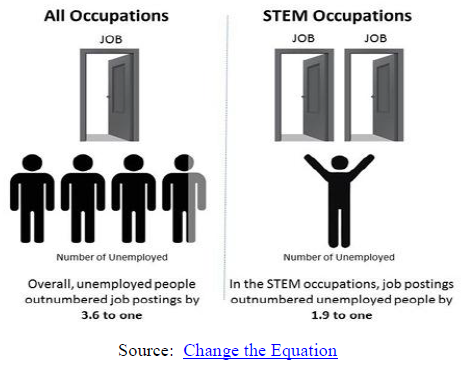 So what to do about this? How do we keep our competitive edge in the burgeoning world of high tech? Do we continue to import STEM talent from around the world or do we push for more Science, Technology, Engineering and Math instruction in our own schools? Most Americans will answer this question with a nod to the latter method, increasing the effectiveness of our schools. That being the case, why isn’t more being done?

It’s not that nothing is being done to bring this about. Numerous programs and STEM learning centers exist across the country. From New York Cities "genius school" initiative to Chicago's elevation of STEM courses to "core subject" status, to Utah’s Neil Armstrong Academy, individual programs and learning centers are springing up everywhere. But the determinative word in the last sentence is "individual".”These are all wonderful, innovative programs but they do not make for the conceptual educational overhaul that is necessary if we truly hope to compete with the rest of the world in the tech arena.

There has been a "sea change" in our economy since the end of the "great recession". Too many job-seekers still can’t find work: the jobs no longer exist in the new tech economy. And too many jobs are still searching for workers with the skill-sets developed in STEM educational environments: there is as yet far too little emphasis in the US on STEM learning.