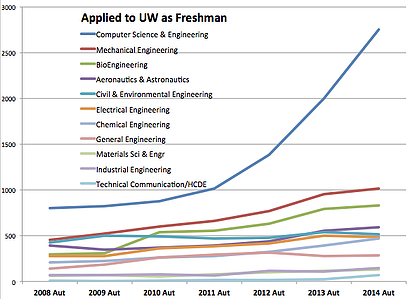 This cutback in computer science degrees has occurred before, in the mid-eighties and in the late-nineties after the dot-com collapse. For those of us who go back a bit farther, we can remember the frenzy to educate more scientists and engineers after Sputnik in the late-fifties; this frenzy had descended into an oversupply of those degrees by the late-sixties and caused a subsequent drawdown in what today would be called STEM subjects.

Of course one new element exists that didn’t in previous collapses: a viable Internet education industry. Code Fellow and Devbootcamp are two excellent examples of programs that can teach coding outside of college. But while alternative courses like these take care of individuals for whom a traditional college would be impractical, they have a high dropout rate and some experts like Hakon Verespej, an advisor with Seattle-based Madrona Venture Group who previously worked at Microsoft, are adamant that a lack of team design experience lowers the educational benefit level and keeps most of the students trained online from jobs at the majors like Microsoft and Google. “No matter how smart you are, there is no way to get the breadth and depth from a four-year education at a top-tier university than you would at something like a bootcamp…,”says Verespej.

What it come down to then is more room in colleges and universities for computer science degrees. Of course the only way that happens is if political will is applied to furnish higher education with more money. We can only hope...