Now I know why LAS VEGAS says “What happens in Vegas, stays in Vegas.” The city isn’t really bragging, it is just embarrassed. There are probably a lot of reasons for that embarrassment, but here are the two I just discovered after watching this video:

First, they have some of the worst public schools in the entire country.

Second, some of those poor Las Vegas schools have no computers.

At least I hope these two reasons embarrass them! Hell, I’m not even from Las Vegas and it embarrasses me that one of the largest, most visited, most storied cities in this otherwise proud country of ours is actually pretending to educate its children in the Twenty-First century without computers! We are not talking about Robotics competitions, or iPads, just simple computers! The city that prides itself as being The City That Never Sleeps evidently has enough money to keep the neon lights flashing, but not enough to educate its young. Sin City indeed!

But luckily Las Vegas also has some committed teachers who don’t intend to let their schools miserable plight continue without a fight. Some of these teachers have formed a SWOT team to carry on the fight. That’s Scholars Working Overtime, by the way. These heros don’t jump out of armored cars armed to the teeth like a police SWAT team, instead they are trying to teach computer skills and programming without computers. The fight against ignorance has always been harder than fighting crime! 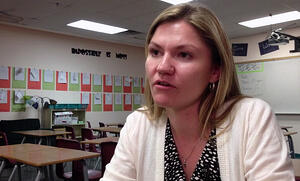 Let's help them with the fight. Meaning, they want some cash to get their kids computers! Please watch it and send them a few bucks to their INDIEGOGO campaign. Please click on the image on the right, and go to their campaign.