Parents are the gatekeepers of toys for their kids, especially for younger children. Their attitudes and appreciation of toys and play are paramount to providing kids with playful opportunities to grow, learn, and explore their ever-changing world.

The Toy Association asked parents to share their understanding and insights about how science, technology, engineering, art, and mathematics skills relate to toys, play, and their children. Here’s a summary of what was revealed by investigating the thoughts, fears, and beliefs of 2,000 parents.

Parents recognize STEM/STEAM skills as advantageous for their kids’ future. Here’s what they disclosed …

PARENTS GET THAT STEM/STEAM IS IMPORTANT with an impressive 91% recognizing the value of encouraging the development of science, technology, engineering, art, and math skills in their kids. That’s why a whopping 88% either have encouraged or plan to encourage the development of these skills in
their children.

GO FOR IT – A majority of parents —76%—want their child to end up in a STEM-related career. An engineer, doctor, web developer/programmer or scientist are some of parents’ top career aspirations for their children.

There is some confusion for parents when it comes to technology and their child. How much technology should kids use, where can they learn it from, and how can parents help? Here’s what parents divulged. 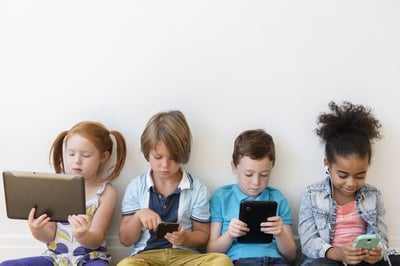 ENOUGH! Therefore, it was not surprising that 72% of parents reported having taken steps to limit their child’s screen time.

OLDER PARENTS = LESS TECH – Predictably, the older the parents, the more likely their children know more about technology than they do.

THE MOST TROUBLING STATISTIC was that 72% of parents agreed that their child’s better understanding of technology made it difficult for them to help their kids learn. While not all STEM/STEAM toys are high-tech, many are, which could present a potential barrier to parental involvement when using these toys.

YES, NO, MAYBE SO – Buried within parents’ aspirations for their children to learn STEAM skills, nearly half—48%—admitted that they might stay away from purchasing STEM/STEAM toys for their child because they worry they won’t be able to help their
children play with it. Yet, there are some opposing forces at work as a parent considers a STEM/STEAM toy, because the majority of parents (55%) acknowledged that labeling a toy as being STEM/STEAM actually makes it more attractive. The conundrum that parents confessed is that they are both drawn to STEM/STEAM toys and a bit tentative at the same time.

HELP ME IF YOU CAN – To deal with this frustration, 75% of parents believe that STEM/STEAM toys should include directions geared towards parents.

Parents want to support their kids learning STEM/STEAM skills and provide the tools they need to succeed. Here’s what parents feel is required in preparing their child for the 21st century.

GET ‘EM WHEN THEY’RE LITTLE – Parents believe it’s better to introduce the concepts of science, technology, engineering, and math at an early age – with the ideal age between four and ﬁve years old.

TOYS AS TEACHING TOOLS – It makes sense that the younger the child, the more eﬀective toys can be as learning tools. The majority of parents (67%) believe STEM/STEAM-focused toys are the primary way to encourage development of science, technology, engineering, and math in their child, followed by at-home experiences (57%). 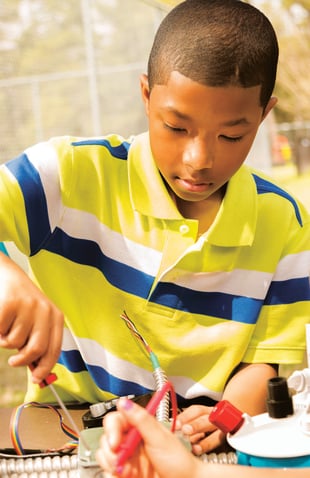 TOP 3 SKILLS – Three speciﬁc skills topped parents’ lists of what kids should master and were pretty evenly rated. They include written and oral communication (60%), tech/computer literacy (58%),
and mathematics (57%).

FOR THE MAJORITY, PLAY IS A PRIORITY – 79% percent of parents agreed STEM/STEAM-focused toys played an important role in skill development—with 82% acknowledging that they look for ways to encourage their child’s learning through play.

HALF OF PLAYTIME DEDICATED TO LEARNING –
Most parents believed between 41 to 50% of their child’s playtime should be dedicated to learning.

GET CREATIVE – 94% of parents encouraged or hope to encourage their child in creative endeavors such as music, drawing, painting, sculpting, etc. The majority think children should begin to express themselves creatively between two and ﬁve years old.

EARLY CODERS – Coding is a skill set parents would like their kids to acquire with 85% having encouraged or plan to encourage their child to learn to code. The majority feel the ideal age to begin developing these skills is between six and seven years old.

LOOKING FOR STEM/STEAM – 85% of parents have speciﬁcally looked for STEM/STEAM  toys when purchasing new toys for their child, which makes sense because 82% agree that playing  with STEM/STEAM toys will lead their child to develop an interest in science, technology, engineering, and math subjects.

Consumers demand a lot these days. This is what parents told us they expect from a STEM/STEAM toy.

CREATIVITY, PROBLEM-SOLVING, FUN, AND CONFIDENCE – Parents considered the most important characteristic of a STEM/STEAM toy be encouraging creativity. This was followed by fostering problem-solving, being fun, engaging, and ﬁnally building a child’s conﬁdence. 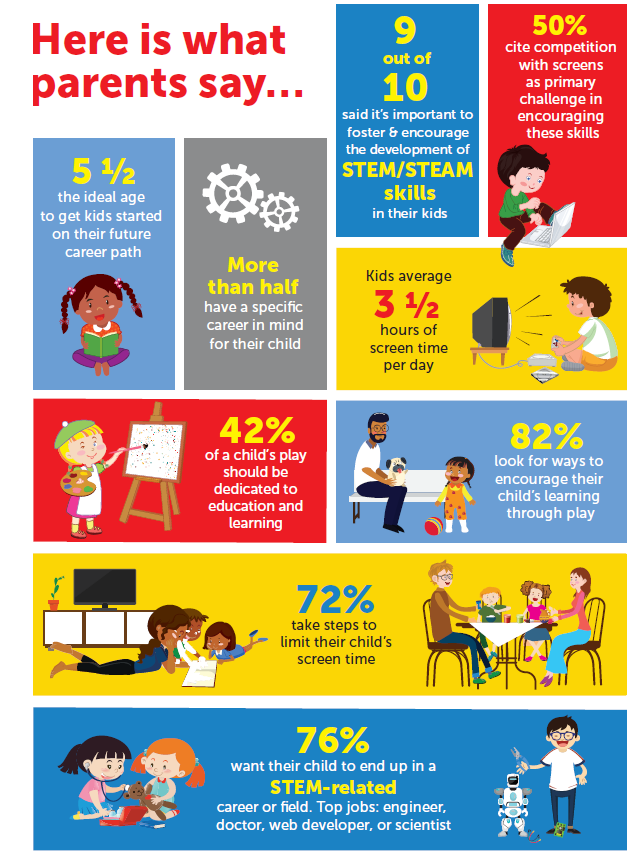 Want to discover the right toys for your STEM classroom?

Check our products and boost your students' STEM skills in a fun and engaging way with robots!  just a click away!

This article is original from The Toy Association, Inc.