Virtual reality simulates a whole universe that users can immerse themselves in, usually thanks to a headset. Augmented reality, on the other hand, adds digital elements such as images to our real-life surroundings. The most well-known example being the Pokémon GO craze that swept the planet in 2017.

When one thinks VR and AR, the first thing that tends to spring to mind is gaming. There are tons of other applications, and education is one of them. The military has been using VR to train young soldiers for years and also the pilot training institutions. One doesn’t want to send inexperienced recruits into dangerous terrain where they could endanger themselves or the expensive equipment. These aren’t the only examples of the uses of VR and AR in education. Across the board, schools and training institutions are showing an increasing amount of interest in what is known as EdTech, a technology that supports education.

Let’s take a look at some exciting examples of virtual reality in education, as well as the benefits and challenges that come with it.

The Advantages Of VR In Education

For some people, their school days were the best time in their life. Most of us, however, have some good memories of the time we spent at school but also remembered a lot of time spent sitting there and feeling bored. One of the main advantages of VR in education is that it makes learning engaging, fun, and easier to look forward to when you’re waiting for the bus at 7:30 AM. Not only that, but it also helps students to process and remember what they’ve learned.

Not to say that virtual reality and education only go together in a middle school or high school setting. It can be useful in just about any educational setting: from preschool to university, as well as in the continual professional development field.

Here are some of the main advantages of augmented and virtual reality in education.

As we stated above, AR and VR based learning can have a significant impact on young learners. That could be partly, because, these being early days, there is a strong novelty effect. A gamified learning process is, however, undeniably a great way to boost student engagement throughout the lesson.

The price of virtual reality education software used to be prohibitive. Not to mention, the cost of hardware that went with it. More and more affordable options are hitting the market, however. AR equipment is particularly accessible, in that most teens already possess a smartphone or tablet. And for schools on a particularly limited budget, Google Cardboard is a great low-cost option.

AR and VR can enable students to collaborate on projects, boost their teamwork skills and even rehearse plays without being in the same room (the very idea put forward by Facebook in their Facebook Spaces demo video.)

VR can fully immerse students in their subject matter and enable them to see what they’re learning about with their very eyes. You have to admit that while reading about Ancient Rome, being transported there is a different matter.

VR can simulate in-field conditions effectively and enable trainees to master the skills required for a certain profession before they’re let loose on any real-life clients/machinery.

As mentioned above, this aspect very much applies to professional training in certain fields, such as the military or those in which requiring workers to operate heavy or dangerous machinery. However, VR can also be used in school-age educational settings such as labs.

With all this in mind, let’s take a look at some practical examples of using virtual reality in education. 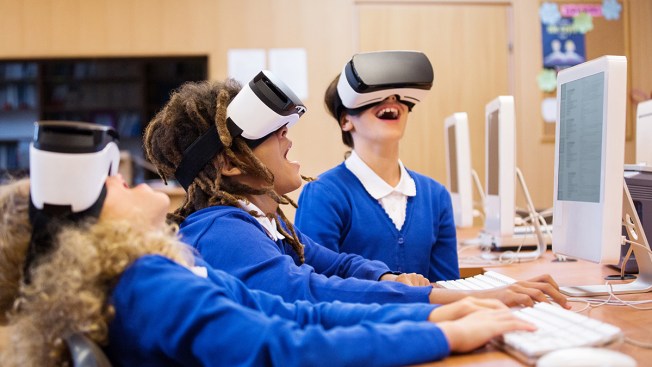 Examples Of VR In Education

Young people nowadays are practically born with a digital device in their hands. They’re highly familiar with tech in all its guises, which is why bringing it into the classroom makes so much sense, not to speak of how it can enhance the learning process. Below are five applications of virtual reality that we think will become standard over the next few years.

Field trips can be fulfilling educational experiences. But, for reasons linked to budget, time, and place, schools can’t always offer their students as many trips outside their four walls as they wish.

Thanks to the likes of Google Expeditions, kids can now roam with dinosaurs, visit the Louvre museum and scale Mount Everest. Discovery Education, a leading producer of VR field trips, offers a variety of experiences focusing on fields such as health, technology, and aerospace.

Education tools such as textbooks and flashcards have been around for centuries. The advent of new technologies doesn’t make traditional tools obsolete – it creates opportunities to make them engaging and fun.  Dinosaur 4D+ by Octagon Studio are AR-enabled flashcards that enable kids to bring long-extinct dinosaurs to life while simultaneously learning about their habitats and origin.

As a highly visual medium, VR truly lends itself to immersing students in the worlds of the great masters. Nowadays, it’s no longer necessary to live in a capital city to visit famous museums. Today, you can easily access some of the world’s greatest works of art. Virtual reality can take students there in a matter of seconds. Many apps and companies providing arts-related VR have sprung up, among them the New York-based Boulevard, who create museum and gallery based experiences complete with lesson plans.

Not every school or higher education institution can offer access to a start-of-the-art lab. As a result, STEM education is suffering from it. Virtual reality and augmented reality enable access to high-level facilities while ensuring the highest level of safety for young scientists. AR apps such as Anatomy 4D enable students to interact with a 3D model of the human body, while Google partner Labster offers learners access to 30 different state-of-the-art lab environments.

Private tutoring has moved on a lot since the days in which local college students would advertise their services on the bulletin board at the local drug store. Distance tutoring via skype has truly taken off over the past few years. And, VR is set to take that even further. Creative tutors are using apps such as Facebook Spaces to demonstrate concepts long-distance, while the US start-up Universe provides learners with Oculus headsets for the duration of their enrollment in one of their tutoring programs. 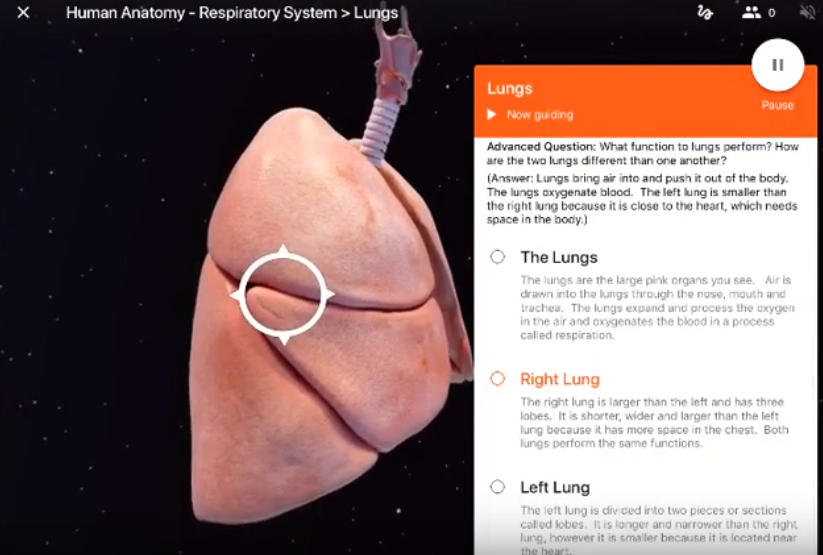 Challenges Of Virtual Reality In Education

As we’ve seen above, the reasons to bring VR into the classroom are numerous. Increased engagement on the part of students, access to state-of-the-art facilities, and no geographical boundaries. The sky’s the limit. That doesn’t mean, however, that using virtual reality in education is an effortless undertaking. Let’s take a look at some of the reasons why.

Virtual reality for schools may prove to be a challenge when education staff lacks the necessary training to be able to implement it correctly.

While increasingly affordable options are available, AR or VR in education does require a certain amount of hardware. Virtual reality will require costly headsets. Even Google Cardboard means that students will need to have smartphones capable of supporting AR apps. Not to mention the fact that many educational institutions have a strict ban on students using their phones on school premises.

Students using virtual reality for education may experience cognitive overload from the large amounts of information they come across. They need to master new tech and the complexity of the tasks they are required to undertake.

Virtual reality in education is in its infancy. As such, it is exciting and engaging for students coming across it for the first time. Experts wonder, however, if a few years down the line, reality technologies will still have the same ability to grab and retain learners’ attention.

VR In Education: Getting Started

Are you interested in the possibilities offered by virtual reality in training and education and prepared to face the challenges involved? As an educator, it can be a good idea to get in touch with a virtual reality workshop provider. They can set you up with a VR learning subscription. This will enable you to try out the possibilities of VR with your students. All without having to invest in costly equipment beforehand.

Discover more about VR and AR with RobotLAB!

We are a Google Expeditions Kit Partner!

Where will you take your class? It's here! Virtual Reality powered by RobotLAB can take you to hundreds of expeditions and field-trips from the comfort of your classroom! Check it out!