On Friday and Saturday, December 20th and 21st, the DARPA challenge has taken place in “dangerous and degraded human engineered environments.” The Defense Advanced Research Projects Agency (DARPA) is--as it says--a Defense Department bureau. That doesn’t mean that the robots in the competition are going to be showing off their ability to kill people and destroy each other. Quite the contrary.

The “dangerous and degraded human engineered environments” mentioned above are not not warfields (although warfields would certainly qualify!), but rather the aftermaths of catastrophic events like the destruction of the Fukushima Nuclear Plant in Japan following the earthquake and tsunami of 2011. The point of the DARPA Challenge is to spawn robots that can be effective first-responders in case of catastrophe of one sort of another, Fukushima being the perfect example.

The idea grew out of the Japanese meltdown. It was believed that had there been somebody or something capable of entering the shattered plant and performing certain shutdown sequences it would have been possible to keep the nuclear pile from going critical. Apparently even the most shielded human being could not have entered the area without being crushed, burned or receiving a lethal dose of radiation.  Only an automaton could hope to get the job done and survive.

Unfortunately no robot then in existence was capable of entering a burning building on its own and flicking the necessary switches and turning off-and-on the critical valves. Even today a robot with those capabilities still exists only in science fiction. "Where we are right now, robots are roughly at the same level of dexterity and mobility of a 1-year-old child," said Gill Pratt, program manager of the DARPA Robotics Challenge (DRC). "They fall down, they drop things out of their hands all the time — in general, they need to try things many times to get them right. That's about where the field is now." Thus the DARPA Challenge where robotics teams from several companies and countries are given financial incentives and challenged to drive emergency vehicles, walk through rubble, enter burning buildings, flick switches and turn valves.

Until a robot has been perfected for use as a first-responder in man-made or natural catastrophes, work will continue at thousand of robotics labs and robotic challenges great and small. It’s a bit late to qualify for the DARPA Challenge. And always a bit too expensive for most of us. But if you find yourself interested in robots and think you have some ideas that might improve the breed, we here at RobotsLAB BOX have a suggestion for you, it is called the NAO Olympics. 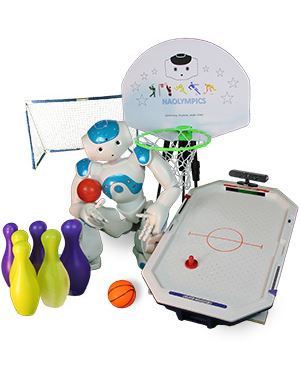 This is not a toy! The NAO Olympics consists of NAO, the anthropomorphic robot developed by the French Company Aldebaran Robotics, an immensely successful humanoid robot used by educators worldwide and a number of specially developed accessories designed to engage boys and girls during this Olympic year in various programming challenges such as trajectories (basketball and bowling), depth analysis and motion prediction (air-hockey), triangulation and bipedal locomotion (soccer), navigation (on a mat with a printed maze) and much more. The robotic miracle has just begun. You or your students can be part of it.