UVD Robots will be Put to Work at Large Scale to Fight the Spread of Covid-19 and Reduce Hospital Acquired Infections in General.

As a second wave of Coronavirus cases surge across Europe, UVD Robots and Blue Ocean Robotics, the manufacturer of the autonomous disinfecting robot equipped with UV-C light, announced today that it was selected by the European Commission directorate-Generale for Communications Networks, Content and Technology to supply 200 of its autonomous disinfecting robots to European Union hospitals fighting against the Coronavirus. UVD Robots’ tender ranked first in the European Commission’s review of numerous disinfecting robots evaluating technical excellence and maturity of technology, quality of approach in deployment, response time in technical support and maintenance, and overall value. UVD Robots are now being deployed in the first 10+ EU countries with more to follow.

“We are thrilled that our UVD Robots were selected by the European Commission to help fight against the spread of Covid-19 in hospitals across Europe, which we believe to be the largest order of service robots of its kind,” said Per Juul Nielsen, CEO of UVD Robots. “We were the first robot in this category and have set the standard for autonomous UVC disinfection in the world. The size and breadth of this order validates the effectiveness of our robots, and we plan to deploy them as quickly as possible to help protect healthcare workers and patients, to combat the spread of Covid-19.”

Unlike many stationary disinfection robots, the UVD Robot is a mobile, fully autonomous robot, that integrates UVC light to disinfect against viruses and bacteria not only on surfaces, but the air as well, providing a fully comprehensive infection control and prevention solution. UVD Robots enable hospitals to reduce disease transmission by killing 99.99 percent of bacteria and microorganisms within approximately 10 minutes in a patient room. The robots have been rolled out to more than 60 countries worldwide.

“Being selected by the European Commission means a great deal to us.  We are focusing on helping fight the spread of Covid-19 while also strengthening the prevention measures against infections overall in operating theatres, intensive care units, cancer departments and similar in hospitals,” said Dr. Claus Risager, CEO of Blue Ocean Robotics and Chairman of UVD Robots. “As the world’s leading autonomous UV-C mobile robot company with more than 75% of the world market, with this order we are going even further to actively help prevent healthcare staff, patients and relatives at hospitals across the EU from being infected by COVID-19 at a critical moment when cases are surging.”

Excellent results at hospitals in Croatia and Italy
Recently, Marin Repustic, Director Assistant for Quality of Healthcare at the General Hospital "Dr.Ivo Pedisic" Sisak in Croatia deployed a UVD Robot for five months in six of its fifteen operating theaters. A sample survey was performed to test its effectiveness, sampling surfaces and furniture in the operating theater following a 15-20 minute disinfection by a UVD Robot. The result showed no existence of these organisms after the UVD Robot, compared to micro-resistant organisms being present in eight out of ten disinfections done mechanically and manually.

“This was an excellent result,” noted Mr. Repustic. “We reduced the time we spent disinfecting by 1.5 hours, freeing up our staff to focus on more important tasks while also enabling us to have a higher turn-over in surgeries.”

When Covid-19 hit Croatia in March 2020, Mr. Repustic and his team moved the UVD Robot to its infectious disease department that treats Covid-19 patients. While the hospital has 48 Covid-patients with 9 in the ICU, only one staff member tested positive for the virus since the outbreak began. By comparison, with 1100 hospital staff members in total, 37 employees working in other departments where the UVD Robot is not being deployed tested positive.  This data represents infection status as of mid November 2020.

Mr. Repustic concluded, “I’m convinced the robot played a very big role in keeping our employees in our infectious disease unit safe from the virus.”

Christiano Huscher, chief surgeon at Gruppo Poloclinico Abano, which operates private hospitals in Italy, also noted: “Before we received the UVD robot, six of the hospital’s doctors had been infected with COVID-19. Since we started using the robot to disinfect, we have not had a single case of corona among doctors, nurses or patients.”

In addition to the healthcare sector, the UVD Robots are now also increasingly deployed within hotels, railways, airports, shopping malls, food companies, cruise ships, pharmaceutical companies, office complexes and many more across the globe, meeting new and heightened expectations for safety and cleanliness. 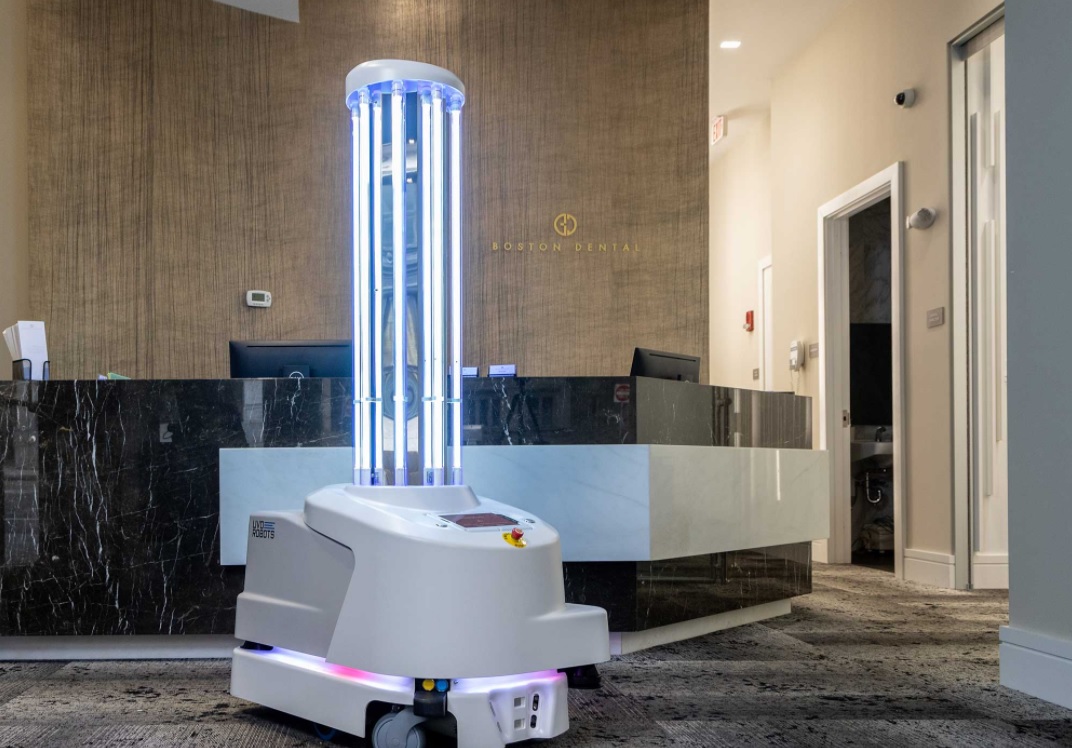