When we introduce children to cubelets, we have them assume the role of robot investigators. Kids form simple hypotheses on each new component works and then test it by building robots and seeing how robot behavior changes. This robot building process teaches kids to be creative when solving their problems.

Story about Robot Olympics in an Elementary School

For many people, the activity 'Robot Olympics’ is not too far-fetched because it at least paves the way for something that is highly possible on a larger scale in the future. Here you have 10-year-olds creating their own little contraptions with simple and amazing tools to discover how things work. The results varied considerably with some robots needing a little coaxing on the way. However, everyone gets the basic idea about robots from this event as they are able to tinker around with Dash and Dot.

Technology is one of the most important parts of our lives; this makes it very important that student should be guided to make use of technology in best of its way. Technology when used to teach the students such that they get to make use of something they already learned theoretically is a great idea. This idea was presented to world by the two learned teachers of 3rd grade. They combined mathematical knowledge of geometry and latest technology of 3D printing together. This combination of two factors not only made mathematics and especially geometry fun for students but also practical use of them is also learned. How these two teachers proceeded while introducing technology of 3D is somewhat like this:

We’ve got something exciting to announce. We call it Cubelets OS 4.
Cubelets OS 4 is a new operating system for Cubelets that changes the way they communicate. Cubelets OS 4 enables Cubelets to do everything they do now, only better!

With Cubelets OS 4, robots will respond faster to the world around them, providing much quicker feedback on any changes users make. Using a Bluetooth Cubelet is speedy and simple! Reprogramming changes behaviors more quickly and reliably, and, with our NEW Cubelets app, remote-control robots respond in real-time.

It's totally shocking how many societies, especially developed ones, tend to shun the old. Aged homes have become a concept known in many parts of the world where people surrender ageing members of their family. The reason; there is no time in this busy life to look after or tend to the old. However, aged homes are a reality that we endure although they help in some way; people deprive their pre-k children of the pleasures of old age which may be synonymous with grandparenthood, and they simultaneously deprive their own children of time that could be well spent with experienced individuals of their families.

3D printing is the new dimension to technology and with uprising and futuristic technology it is necessary that the students are guided to make use of it. 3D printing is one of the technologies that can open up the new dimensions of learning. Sometimes, thing are too fragile to be handled, these can be printed in 3D form and can be understood in better understanding and without any fear of them being broken down or ruined especially rock structures, fossils and microorganisms that are difficult to study under microscope can now be studied in magnified form. When introducing 3D printing to students, teachers should keep in mind these five tips that will make it easy for them to teach. NAO for Autism: An Effective Way to Develop Social Skills

Autism is being experienced in different parts of the world. Obviously there's a wide spectrum of Autism. Some people who are autistic can hardly communicate and blend with the crowd. They easily lose their focus and sometimes act violently. But with the continuous innovation of technology, a program for the NAO robot called ASK NAO was made to help children with autism develop their social skills. This will make it easier for them to interact with people or respond with different actions.

Technology is taking a big leap of advancement in every sector of industry today. Artificial intelligence in particular has taken a new turn with the NAO robot.  Programmed at Rensselaer Polytechnic Institute by Professor Selmer Bringsjord, the robots are able to detec and attract human attention. They can even give responses which is utterly awesome. Some may call it "self awarness...

Champions before and after school program is featuring NAO robots!

When it comes to education, we always want the best for our children. However, there are times that you will see them no longer interested in studying their lessons or even going to school. They can even tell you that a school is a boring place. These days, teachers can hardly get the attention of children. With this, it would be hard for them to make their students understand what the lesson is all about. They should come up with an idea that will catch the interest of their students. 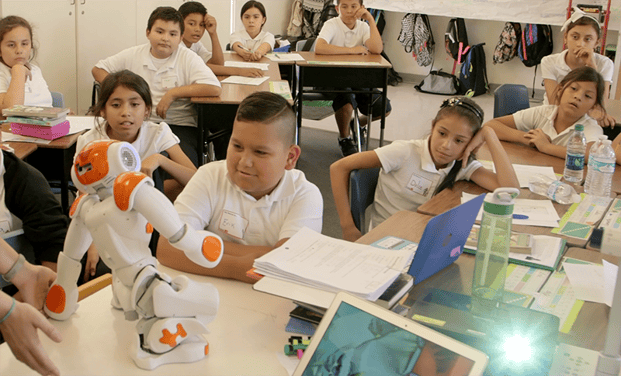 Robots in classrooms are no longer an unimaginable vision. They are being used in various schools from different parts of the world for education purposes. Humanoid robots are being used these days in teaching Science, Technology, Engineering, and Math or the STEM subjects to children especially to places that are having problems with these subjects. This is why NAO robots are distributed to many organizations in order to improve standard education.