The Milan Malpensa International Airport in Italy is a major airport that welcomes over 20 million passengers each year. Their customers' safety is crucial, especially in these unprecedented times. To help protect travelers from contaminants such as COVID-19, they've decided to implement Connor UVC robot to systematically disinfect the Airport to help prevent the virus from spreading.

The Milan Malpensa Airport is the first Airport in Italy to deploy robots to clean and disinfect airport terminals. The Connor UVC Robots have already been tested and are actively at work targeting bacteria that are both in the air and on surfaces.

Why did the Milan Malpensa Airport Choose the Connor UVC Robot?

The Airport reached out to different disinfection companies looking for the best solution during these harsh times, and they selected the Connor UVC as the best platform for decontamination for many reasons. First, unlike other systems that work manually (systems such as Xenex, Tru-D, SteriPro and others), the Connor UVC Robot works autonomously. It plans its routes independently and intelligently avoids people and other obstacles. Since there is no need for human assistance, this robot is highly efficient.

The Connor UVC robot works continuously for up to eight hours, decontaminating areas, and eliminating pathogens, when other platforms such as the UVD robot from Blue Ocean Robotics has a time of use of 2 hours only. It's a state-of-the-art decontamination robot that uses the most advanced technology to disinfect surfaces on its own without leaving dead corners.

It's also the only platform with dual disinfecting: UVC and H2O2 disinfectant spray, offering a higher result for decontamination. It includes three different cleaning modes, including:

This powerful combination is highly efficient for maximum impact. The Connor UVC robot performs its job perfectly – making the most of its time before recharging. If its liquid runs low, it will automatically prompt an alarm function to replenish its supply.

While its inner workings are highly advanced, the robot's interface is very user-friendly. With just a few taps on the touchscreen, it's possible to select the route, the method of disinfection easily, and the time allotted for cleaning.

The Connor UVC Robot is Applicable to Many Situations

The Connor UVC robot's technology works well in many other applications besides airports, including hospitals, schools, shopping malls, hotels, restaurants, and many other public areas where people congregate or pass through.

Its disinfection process includes three distinct modes that can be used where applicable. First, it can deploy a shortwave UVC ultraviolet kill germ lamp to destroy bacterial virus cells. When these cells die, they are unable to reproduce or replicate. And there is no drug resistance to worry about. Using broad-spectrum, high-efficiency UVC, there's no need to add chemical agents or pollutants.

The second mode of the robot's decontamination process is a dry mist of hydrogen peroxide. This mist is dispersed in spaces for sterilization against the minuscule COVID-19 droplets that could be in the air.

The last application includes both shortwave ultraviolet light and the hydrogen peroxide dry mist. This combination can accelerate the decomposition of the contaminants to quickly and efficiently clean and disinfect an airport, hospital, school, or any other space.

RobotLAB is Working to Make the World Safer

Aside from the Milan Malpensa Airport, RobotLAB is working on many other deployments of the UVC robot to make the world safer. Equipped with cutting-edge technology and an ability to navigate public spaces to disinfectant autonomously, it is one of the best robotic solutions in the fight against the threat of COVID-19.

To learn more about the Connor UVC Robot or to request a quote, visit us online. 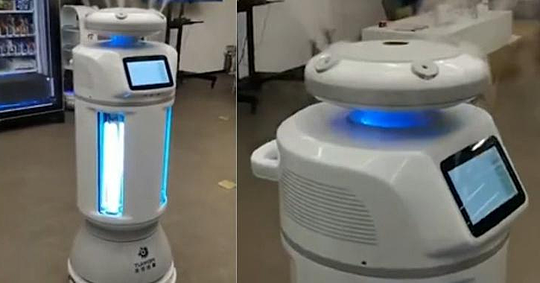 Discover more robots that can help to fight this COVID-19 pandemic!

Let robots do the dull and dangerous job, not humans! Breathing disinfectants every day isn't a good idea for the long run, holding a UVC sanitation light can cause skin cancer, and vacuuming floors simply isn't enough. Discover more here