WE HUMANS WEREN’T ready for the novel coronavirus—and neither were the machines. Robots can help doctors distance themselves from patients, and help those in isolation cope. But getting the machines into hospitals is fraught with difficulties. 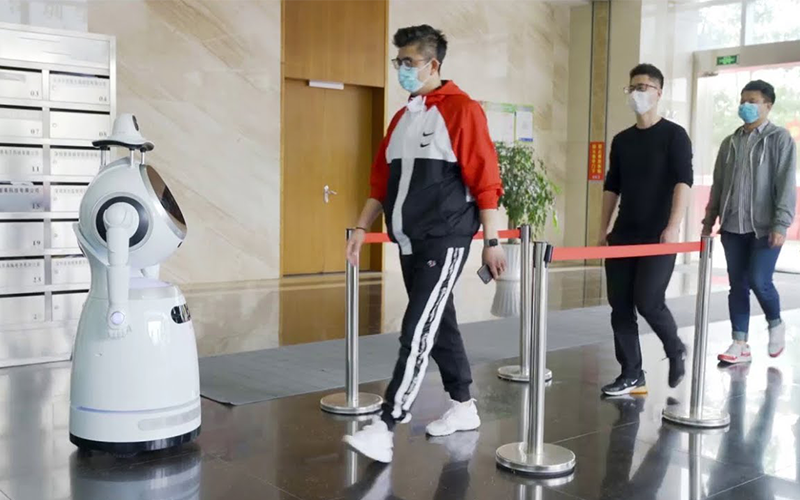 The pandemic has come at an awkward time, technologically speaking. Evermore sophisticated robots and AI are augmenting human workers, rather than replacing them entirely. While it would be nice if we could protect doctors and nurses by turning more tasks over to robots, medicine is particularly hard to automate. It’s fundamentally human, requiring fine motor skills, compassion, and quick life-and-death decision-making we wouldn’t want to leave to machines.

But this pandemic is a unique opportunity to jump-start the development of medical robot technologies, argue a dozen roboticists in an editorial out today in the journal Science Robotics.

Perhaps “people start to reflect that for situations such as this, how robots can be used not only to help with social distancing but also for increasing social interaction,” said Guang-Zhong Yang, founding editor of the journal, during a press conference.

The editorial serves as a call to arms for more research. “Robotics and automation could play a major role in combating infectious diseases, such as Covid-19,” Yang and his fellow editors wrote in their piece. In particular, they argued: “Robots have the potential to be deployed for disinfection, delivering medications and food, measuring vital signs, and assisting border controls. As epidemics escalate, the potential roles of robotics are becoming increasingly clear.”

Additionally, robots could enable a form of telemedicine that would keep humans out of areas of contagion. “Covid-19 could be a catalyst for developing robotic systems that can be rapidly deployed with remote access by experts and essential service providers without the need of traveling to front lines,” they wrote.

A cruel irony of the coronavirus pandemic is that medical professionals know better than anyone that social distancing is critical for slowing the rate of new infections, yet they’re forced to be the closest to the disease. And those that need social interaction perhaps more than anybody—the elderly—are the ones who need to isolate the most, since they’re the most susceptible to the disease.

But if machines can help care for patients, it’s less likely that human caregivers will themselves get infected. Autonomous robots, for instance, can roam rooms, disinfect surfaces with UV light. Or they can deliver supplies, as a robot named Tug is already doing. Smarter AI can help diagnose people with Covid-19, and the article’s authors suggest that engineers might develop mobile robots to perform simple tasks like taking a patient’s temperature. This could all go a long way to lightening the burden on human health care providers and helping them keep their distance from the infected. That could help stave off future bottlenecks, in which so many workers are ill or quarantined after potential exposure that hospital staff cannot adequately care for incoming patients.

There’s plenty of precedent for machines helping humans do their jobs, notes MIT roboticist Kate Darling, who wasn’t involved in the editorial. “ATMs allowed banks to expand teller services,” she says. “Bomb disposal robots let soldiers keep more distance between themselves and danger. There are cases where automation will replace people, but the true potential of robotics is in supplementing our skills. We should stop trying to replace and start thinking more creatively about how to use technology to achieve our goals.”

It’s not hard to imagine a future in which delivery robots bring food and supplies to quarantined people’s homes, preventing delivery workers from potentially infecting them. Quarantined folks are already keeping in touch with friends and relatives via Zoom and FaceTime, but social robots could also keep people company in the absence of human peers. The telepresence robot, often something as simple as a screen on wheels, has begun appearing in nursing homes to help family members connect with otherwise isolated elders. In hospitals, such robots could “teleport” a specialist doctor in London to a patient in San Francisco.

Still, you’d be hard-pressed to find a more sensitive interaction between humans than the doctor-patient relationship, and this has remained a thorny problem in hospital robotics. A doctor has to keep people alive but also keep them well, empathizing in a particularly difficult time. Robots don’t do empathy.

How well a robot can tackle a health worker’s task depends, in some measure, on whether it’s replacing that human interaction, or simply channeling it. “It does depend on: Is the robot acting as a medium for a doctor or another health care provider or professional? Or is the robot in itself supposed to be running some sort of task?” asks Julie Carpenter, a roboticist and research fellow at the Ethics and Emerging Sciences Group at Cal Poly San Luis Obispo, who wasn’t involved in the new paper. “Certainly making them less threatening to people is important.”

Take that Tug robot, for example. It’s more or less a rolling box that autonomously roams hospital corridors. It tells you in a friendly voice if it’s waiting for an elevator, and some hospitals even dress it up in costumes for the kids. Robots need to balance functionality and the patient experience. “For example, a robot may need to be very big in order to lift a patient, but then its sheer size can be intimidating,” says Carpenter. “Mitigating someone's psychological stress should absolutely be a significant and thoughtful part of designing robots, especially in caregiving scenarios.”

Engineers also have to consider their hospital worker users when designing medical robots—which they haven’t really been doing up to this point. “They’re designed by engineers, for engineers,” says Henrik Christensen, the director of the UC San Diego Contextual Robotics Institute and a co-author on the editorial. Nurses and doctors are already stressed and strapped for time. If you tell them it’ll take two hours to teach them to use a robot, “then you've already lost them,” Christensen adds. “We're not good enough today at designing robots that are truly fluent.”

One of the bolder ideas to come out of the Science Robotics press conference was a competition for medical robots. Darpa famously ran a robotics competition in 2015 that pitted humanoid machines against one another, greatly furthering research in robot autonomy. Now Darpa is running another challenge for robots to navigate underground environments. (Then there's the Darpa Grand Challenge, which offered $2 million to the first team that could race an autonomous vehicle between cities in California and Nevada; the Stanford Racing Team won the prize in 2005.)

So why not set up a robotics challenge in a hospital? “No doubt," says Christensen, "this is a way of crowdsourcing innovation.”12

DISCOVER MORE ROBOTS SOLUTION DURING THIS COVID-19 WITH ROBOTLAB

Check them out Here